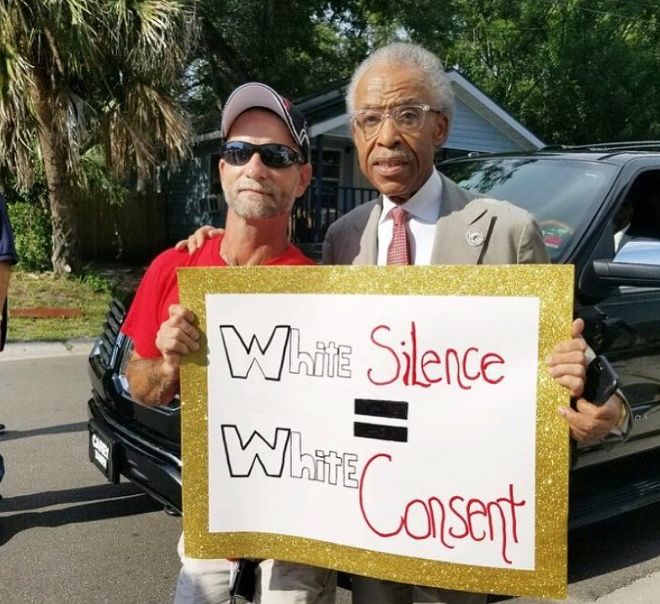 The rally followed the fatal shooting of an African American man named Markeis McGlockton, who was murdered outside a convenience store after an argument over a handicapped parking spot went awry.

According to McGlockton's girlfriend, Britany Jacobs, Michael Drejka started a confrontation with her while her boyfriend was inside. When McGlockton came out to see Drejka yelling at Jacobs, he pushed Dreyka to the ground, from which he shot McGlockton.

Seconds later, McGlockton, clutching his chest, can be seen running back inside the Circle A Food Mart. He then fell to the ground.

A security camera outside the store caught the entire incident, as did McGlockton's son, who was sitting in the car with Jacobs.

Later on, Drejka told local deputies he had feared for his life at the time, so he pulled the trigger.

Markeis McGlockton walks out to see his girlfriend being harassed by Michael Drejka. He pushes Drejka down and begins to STEP BACK. Drejka in turn shoots him in the chest and McGlockton runs back in and collapses in front of his 5 YEAR OLD SON. Drejka faces no charges. pic.twitter.com/n4TeKZH5i1


"How can you have a civil become the judge and jury over whether somebody should live?" Sharpton said, according to Tampa Bay TV station WFTS, as he stood next to the parents of Trayvon Martin, the 17-year-old who, in February 2012, was fatally shot by neighborhood security George Zimmerman in Stanford – Zimmerman was later acquitted of Martin's murder under the "stand your ground" defense. "That's what this law represents. It is also disproportionately used to the disadvantage of blacks."

He adds: "We will be involved until we see the prosecution and arrest of killer of Markeis McGlockton."

On Monday, just days after the rally, Pinellas County Sheriff Bob Gualtieri, who has taken heat for not arresting Drejka, saying he was precluded by Florida's "stand your ground" law, apparently took issue with Sharpton being among those to appear at rally.

"It's a bunch of rhetoric. I don't pay much attention to it to tell you the truth," Gualtieri said at a separate press conference in St. Petersburg, according to the Tampa Bay Times. "I wasn't there, and I don't really care what Al Sharpton has to say. Go back to New York. Mind your own business."

.@TheRevAl explained why he held a rally to call for justice in the shooting death of Markeis McGlockton. The rally was held at St. John Primitive Baptist Church in #Clearwater. https://t.co/jPURuoDBEi pic.twitter.com/ETmirj0D7q