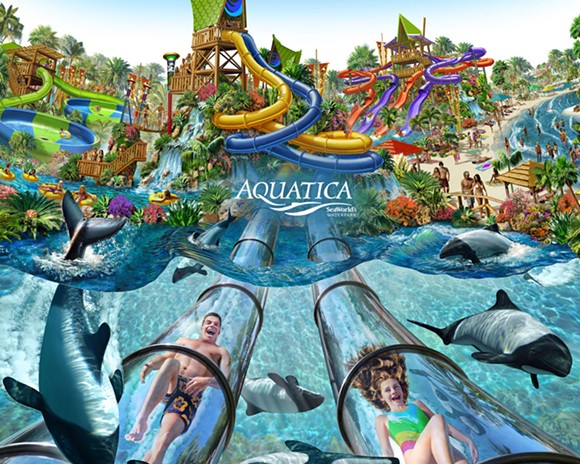 On the heels of this year’s Ray Rush, it looks like SeaWorld is planning yet  another new attraction at Aquatica.

New permits pulled with the South Florida Water Management District discuss an area along the southern end of the water park, near the wave pools, for what is called “Aqo Project 2019.”

The permits don’t give many details on what the project slated for next year may be, but old rumors from 2013 shared on theme park news site Screamscape called for a family raft ride that would splash down into a bird aviary, similar to Aquatica San Antonio’s Roa’s Aviary.

The rumored ride was to be named “Taruka Rush” and feature a dual slide with features similar to those Aquatica San Antonio’s Walhalla Wave, with the animal habitat and lazy river-like feature at the end of the ride.

The plans for Taruka Rush never materialized, and instead the park went for thrills with Ihu’s Breakaway Falls opening in 2014. The triple drop tower attraction, with a fourth non-drop floor option, was at the time the tallest and steepest waterslide in Central Florida. The slide was even featured on Travel Channel's Xtreme Waterparks show.

Then earlier this year the park opened Ray Rush, a thrilling family raft ride that replaced HooRoo Run, a quick family raft ride similar to the Bubba Tub at the now-closed Wet ‘n Wild water park just up the street. Ray Rush featured many of the same thrills the rumored Taruka Rush had.

Aquatica has also notably been slowly decreasing the number of live animals at the park, and rumors reported by Behind the Thrills point to Roa’s Aviary at Aquatica San Antonio closing in the coming years. With a similar ride already in the park and the live animal interactions becoming less of a focus, it’s likely the 2019 plan isn’t the water slide once rumored for this plot.

Taruka is also the name of a Nepalese village known for graphic bullfights and with SeaWorld already in a fight of its own regarding animal rights, naming an attraction after a region known for animal cruelty might not be the wisest of decisions, so the name Taruka Rush seems to have long been dropped by the park.

The permits do indicate a tower will be constructed in the area where cabanas are currently located with the construction stretching to the pools near the Omaka Rocka and Whanau Way slides. The Taruka Rush site plan had new cabanas that wrapped around the ride area, whatever Aqo Project 2019 ends up being, this part of the original site plan will probably be included.

Some have speculated that the new ride could be a water coaster. As far back as 2009, a magnetic water coaster-like attraction has been rumored for the park. Both Disney World’s Typhoon Lagoon and Universal’s Volcano Bay, which replaced Wet ‘n Wild, have water coasters. Unlike a traditional slide, water coasters are able to travel both downhill and uphill, similar to a roller coaster, thanks to water jets and magnetic driven lift hills. Water coasters can also provide a family-friendly experience while still looking quite impressive.

The location of the new attraction tower is along the park’s parking lot exit and would be extremely visible from International Drive. When Aquatica first opened, the park was nearly hidden from I-Drive, but that changed when the eight-story Ihu’s Breakaway Falls opened in 2014. SeaWorld made sure to put a large logo for the park on top of the Ihu’s tower, which is located along the northern edge of the park about the same distance from I-Drive as the now proposed southern tower.

Unlike traditional theme park attractions, water slides can be constructed much faster, often times taking only a few months to build once the initial planning is finalized.

No details on when the new attraction will open but it will likely open before next summer’s rush. That timeline puts the construction groundbreaking sometime late this year or early next.