Band of the Week: Levity 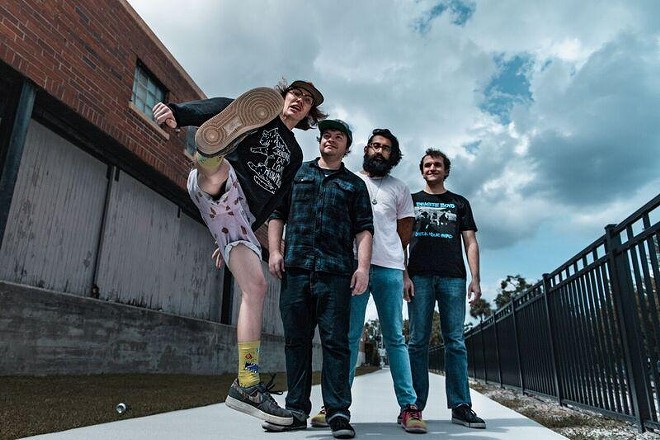 Welcome to Orlando Weekly's "Band of the Week." Every week, we highlight one of our favorite local bands. This week, we're pleased to bring you Levity.

Levity is playing their EP release show at Will's Pub on Aug. 15 with Raising Cadence, Up From Here, and We Could Be Heroes.

When did the band form?
The band’s original lineup formed in 2014. We’ve gone through some lineup changes here and there, and our current awesome lineup has been together for about a year and a half or so.

What has been your most memorable show so far?
Probably opening for Emarosa, Spill Canvas or Red Jumpsuit Apparatus. Those were three sold out shows in a row for us in a span of a few months to end the year for us last year. The energy at each show was amazing, not to mention they were all bands we’ve all grown up listening to so it was surreal. We try to make every show we play memorable though, no matter the circumstances.

Which local band is your favorite one to play a show with?
We love and are friends with many fellow Orlando bands. Raising Cadence is definitely one of the first ones that come to mind. We met them at the very beginning of Levity, and they’ve been nothing but supportive ever since and one of our best friends in the scene. They’re such genuine and fun guys to be around. That’s why it’s special to us to have them at our EP release show. Felicity is another band that we’ve grown very close to and that comes to mind.

What description gets used for your band that you would most like to correct people on? Why?
We’ve gotten some comparisons with Green Day, and I’m not quite sure why? I mean our songs may be catchy but I’d like to think we have a bit more complexity and depth than most Green Day songs. Not to diss on Green Day, I just can’t see how we sound like them exactly. But our sound is diverse, and not constricted to a certain style of band, so it just depends what elements the listener is hearing.

What’s your favorite thing about being an Orlando band? What's your least favorite? Why?
I think the sense of community between Orlando bands, and with Orlando in general. There’s always (for the most part) such positive energy from people in Orlando, and awesome support from other bands. There’s a certain crowd that you will most definitely run into at most big Orlando local shows, both of band members supporting and music fans that love coming out to shows. Our least favorite is probably not being a metal band. Orlando’s metal scene has blown up and there’s hardcore bands playing at every huge heavy show you can imagine. I don’t know maybe we’ll just write a ridiculously heavy song and open for Cannibal Corpse in our near future.

Any big news to share?
Our EP release is coming up! This is our first ever EP, and will consist of a total of 6 songs, which include our 2 singles out now. We’re very excited to share our music with everyone, it’s been a long time coming. And we’re equally as excited for our headlining show celebrating its release. Once again, it will be at Will’s Pub on August 15th with Raising Cadence, Up From Here, and We Could Be Heroes. Our drummer Bilal has promised to give a hug to anyone who comes out, so it’s a pretty big deal.

The Heard band of the week levity