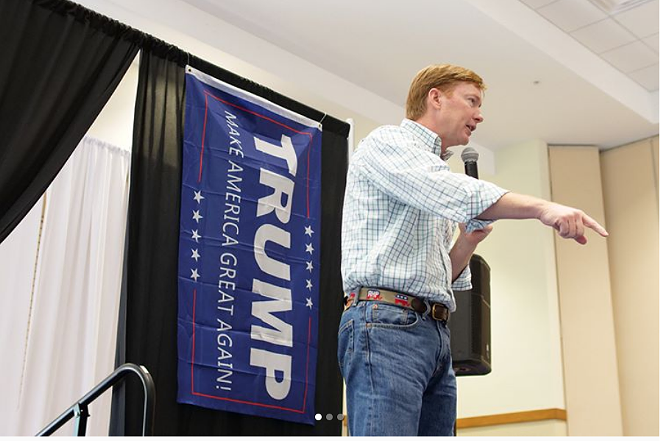 Has state Agriculture Commissioner Adam Putnam's campaign for governor begun to run out of money?

The short answer: no. But it's still notable how the special interest cash once directed toward Florida Grown, Putnam's political committee – which garnered big chunks of contributions from heavyweight donors like Publix, Florida Power & Light and U.S. Sugar – has begun to evaporate as U.S. Rep. Ron DeSantis' bid for the GOP gubernatorial nomination has picked up steam in recent weeks.

DeSantis, a three-term congressman, has President Donald Trump to thank for the boost. The first of  Trump's endorsements came via Twitter in December, followed by another Twitter endorsement in June. Then, on Aug. 2, Trump made it official when he formally endorsed DeSantis during a rally in Tampa. It was a real spectacle.

Meanwhile Putnam's committee hasn't reported a contribution since July 27. (As the president would say, "Sad!") Through the month of July, Florida Grown managed to raise $1.1 million, $750,000 of which came from just two donors: the Florida Chamber of Commerce and committees tied to Associated Industries of Florida, some of the state business lobbies that are loyal to Putnam.

As of Aug. 3, Politico reports, the committee had just $1.7 million to work with, representing the lowest amount of dough the campaign has had on hand throughout the election cycle.


In August alone, on the other hand, the political committee of rival Ron DeSantis brought in nearly $780,000, including $300,000 from the committee run by incoming state House Speaker José R. Oliva (R-Miami Lakes), and $100,000 from the Florida Medical Association. Both have endorsed DeSantis recently, but also represent the type of Tallahassee money that was not moving DeSantis’ way when it appeared the nomination was Putnam’s to lose. DeSantis’ August also included a $25,000 check from Sunshine Gasoline Distributors, a company owned by Max Alvarez, a longtime Florida GOP donor who also gave $30,000 to Putnam’s committee during this election cycle.

The apparent drying up of contributions to Putnam is a concrete sign of the campaign's new dynamic, with DeSantis firmly established as the front-runner on the Republican side of the gubernatorial race. It has been a stunning turn of events for Florida political operators, many of whom abide by the “your turn” philosophy. That unofficial rule dictates that if — like Putnam — a politician helps his or her political party and is patient enough, nomination to higher office will follow.


So what does this mean for Putnam?

It's not good. Though it's framed through the lens of the Trumpian era, it's also reminiscent of the 2010 gubernatorial race, when once-outsider rich guy Rick Scott took on state Attorney General Bill McCollum, the good ol' boy-appointed heir, in the GOP gubernatorial primary – and won.

Scott, who's now running for a spot in the U.S. Senate after terming out in the governor's mansion, spent more than $70 million of his own personal wealth to boost his candidacy in the 2010 election. Putnam, though he comes from a long line of wealthy Florida farmers, isn't strapped with that sort of cash.

But maybe it's not as much about what it says for Putnam, compared to what it says about DeSantis' campaign – that is, at this point, with the nationwide conservative fervor on his side, it's DeSantis' race to lose.

The Florida primary takes place on Tuesday, Aug. 28, and early voting is open from Friday, Aug. 17, through Sunday, Aug. 26.

Putnam's campaign did not return a request for comment.