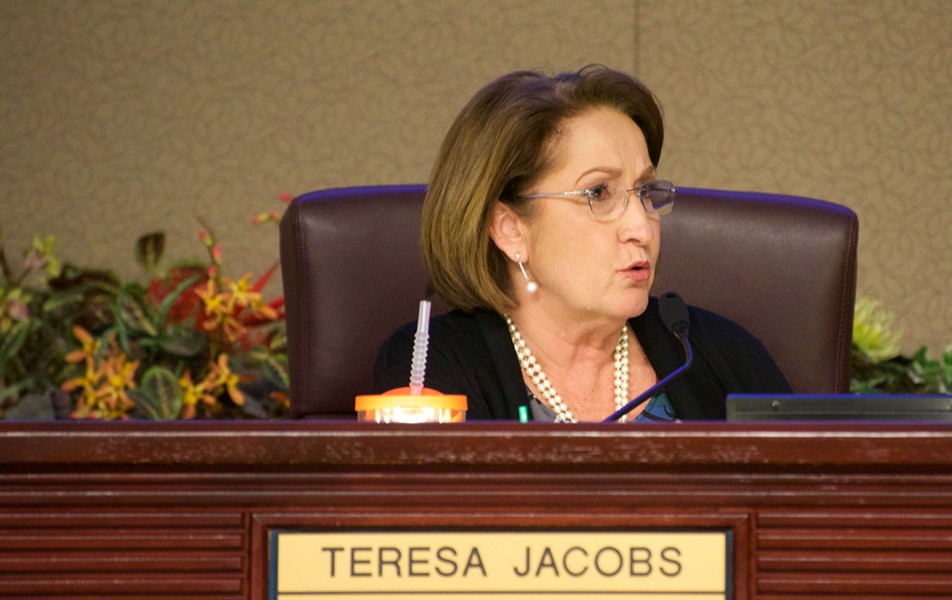 On Wednesday, Orange County Mayor Teresa Jacobs fired back at County Sheriff Jerry Demings' claims that she was slow in acknowledging his requests for additional deputies to staff school campuses in his jurisdiction and that a presentation regarding his requests was canceled.

Jacobs' statement during the press conference comes in light of a fuss that was kicked up last week between the two high-ranking county officials. Just days prior to the start of the school year, on Friday, Demings confirmed that there would not be enough deputies to provide a full-time law enforcement presence at every elementary campus in unincorporated areas of Orange County during the current academic year.

Under a new state law – which was approved in the wake of the mass shooting at Marjory Stoneman Douglas High School that left 17 dead and 17 more injured – one full-time deputy is guaranteed in every one of the 117 campuses in Demings' jurisdiction. Orange school district, however, has opted out of the section of the law that allows some school personnel to carry firearms on campus or hire additional non-law-enforcement employees for the job, instead deciding to staff schools with officers through contracts with law enforcement and to use the district's in-house police force.

On Monday, Demings, who's running to replace term-limited Jacobs as county mayor, sent out a campaign email claiming Jacobs took almost two months to acknowledge a letter he sent on May 21 to county commissioners, essentially nudging the blame in Jacobs' direction. The letter highlighted the number of deputies required for the current school year, as well as the estimated expenses to enact the new law.

In the statement, Demings also said he was set to provide an update to the commissioners on July 31. He claims that presentation was canceled.

However, that's where Jacobs took issue with Demings' claim, calling the statements within the email "less than accurate." In her reply, Jacobs said her staff contacted Demings' office within a couple weeks to further clarify several points in the May 21 letter, which said Orange police department planned to fulfill the mandate for the 2018-2019 school year mostly through the use of overtime for existing deputies, with an estimated cost of $6.8 million. Demings' May 21 letter to Jacobs also laid out the cost of hiring the new personnel, including supervisors, by the beginning of the following school year 2019-2010, with an estimated cost of almost $12.9 million.

Jacobs then claimed that the presentation was nixed because Demings, at the time, was still finalizing his agreement with the Orange school district.

As Jacobs noted during the press conference and in her previous letters to Demings, she had no control over Demings' staffing decisions nor Orange County Public Schools' decisions. She said she was under the impression that the plan was to utilize overtime staffing through the current county police workforce, not hire additional law-enforcement staff.

It's not a problem that's unique to Orange school districts. Across the state, according to a report from the Sun Sentinel, schools are struggling to hire enough law enforcement personnel to cover each district's respective number of campuses. The Sentinel reported that when Broward County students returned to class this week, the school district had yet to hire armed guards to protect half of the 26 campuses in Fort Lauderdale.