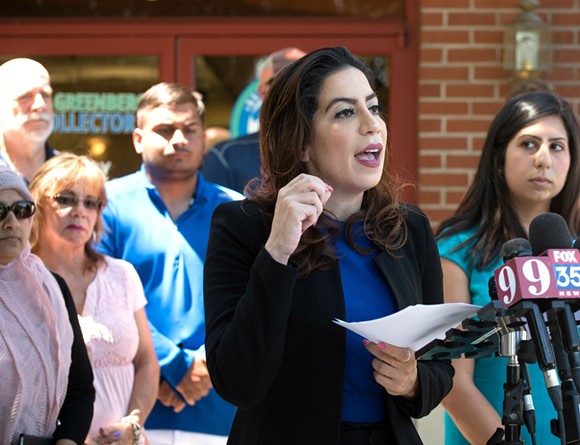 The petition, which currently has 639 signatures, also asks for Attorney General Pam Bondi and Leon Biegalski, executive director of the state Department of Revenue, to urge Greenberg to resign.

The Seminole County tax collector is facing public backlash after posting on his personal Facebook, "Very simple question...Name just ONE society in the developed world that has benefited in ANY WAY from the introduction of more Muslims. Just one. Asking for a friend." Greenberg also included in the comments a link to an article from Jihad Watch, a site that critics have called anti-Muslim propaganda.

The Republican official later told Orlando Weekly that he was literally "asking for a friend" when he copied the question originally posted by radio host Neal Boortz, who claimed recently that "there is no such thing as Islamophobia" because because fearing Islam isn't irrational or unreasonable. Greenberg retweeted Boortz's post on Monday.

Greenberg has since taken down the original post, though he has refused to apologize for posting it in the first place.

"I don't have a racist or bigoted bone in my body," Greenberg told OW. "I'm provoking public discussion. I'm simply asking a question. I don't think there's anything wrong with having a discussion, especially when they're getting censored on other platforms. … We live in a world that's extremely politically correct."

But Rasha Mubarak, president of the Young Democrats of Orange County, said Greenberg is being disingenuous about the nature of his question because he has a long history of making bigoted remarks about Muslims and immigrants on social media as far back as 2015, including a 2017 post after the Manchester bombings that stated "This is the reality of unchecked Muslim immigration."

"From Islamophobia to anti-Semitism, to any kind of xenophobia, we all stand against it," Mubarak said at a Monday press conference in front of the Seminole tax collector's Lake Mary office. "[Greenberg is not 'asking for a friend.' He is in fact furthering his anti-Islamic agenda. … He's dismissive, and condescending and it's putting people in harm's way.

"As an elected official, it is his obligation to stand with this community and he's chosen divisive language to further an agenda that marginalizes an already marginalized community," Cuevas said.

"Mr. Greenberg has demonstrated little restraint and his posting was highly inappropriate," Sykes said. "These kind of posts legitimizing religious bigotry exacerbate racial and religious animosities and feed into the anti-Muslim rhetoric that is not only dangerous to the misperceived and vulnerable Muslim community but to people of color and the entire Central Florida community."

Anna V. Eskamani, a candidate for Florida House, said she was not surprised to find that Greenberg was "arrogant and hurtful" after previous controversies, including an instance where Greenberg tried to get out of a
speeding ticket by asking a Lake Mary police officer for "professional courtesy" as an elected official.

"If you're unsure about the contributions of this [Muslim American] community, a quick Google search would do you a favor," she said. "Muslims have contributed to mathematics, the creation of coffee, along with many other incredible additions that each one of us benefit from and use every single day."

"[Hate] should not have a home anywhere in the U.S. and it should be given no shelter," Diaz Truman said. "It is clear that Joel Greenberg is not capable of fulfilling his elected duties. This clear and abject failure to maintain a fair and impartial role in our county government, as well as a history of abusive and divisive behavior, shows that an apology is not enough."