Eyes of the nation on Florida as black progressive takes on Trump endorsee for governor; plus all the Central Florida election results 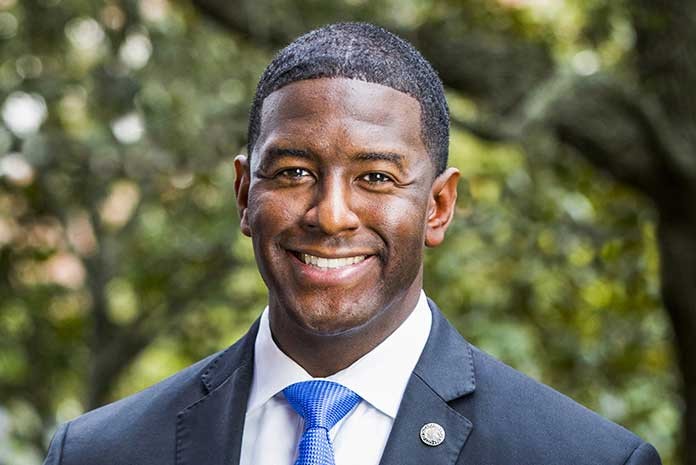 Beating the projected odds, Tallahassee Mayor Andrew Gillum won the Democratic nomination for Florida governor Tuesday night. Gillum is the state's first African-American nominee for governor. If elected, he would be the first black governor of Florida.

Caldwell is a real-estate appraiser who traces his family back seven generations in Florida and was elected to the House in 2010. Caldwell had the backing of groups such as the National Rifle Association and from U.S. Sen. Marco Rubio, R-Fla.

As a lobbyist during the 2018 legislative session, Fried represented the Florida’s Children First social-service advocacy agency; the Broward County School Board; and San Felasco Nurseries, which was one of the first medical-marijuana license-holders in the state.

The two will now go head-to-head in November to replace term-limited Agriculture Commissioner Adam Putnam, who lost a bid for governor Tuesday night.

With the majority of precincts reporting in Orange and Seminole Counties, Murphy finished with more than 86 percent of the vote, according to the state Division of Elections. The incumbent, who has held office since 2016, pulled far ahead of her challenger Chardo Richardson, an Air Force veteran and the president of the American Civil Liberties Union of Central Florida.

Meanwhile, Miller ended the night with about 54 percent of the vote in Orange and Seminole Counties. His competitors, former U.S. Senate advisor Vennia Francois and Sanford businessman Scott Sturgill, trailed behind him in the GOP primary.

U.S. Rep. Darren Soto surged past former Congressman Alan Grayson by a margin of about 2-1 to win the Democratic primary in Congressional District 9 Tuesday night.

Soto received 66 percent of the vote to Grayson's 34 percent in the district encompassing all of Osceola County and parts of southeast Orange and Polk counties.

Soto will go on to compete against Republican Wayne Liebnitzky in the Nov. 6 election. Given the district's partisan lean toward Democrats, though, it's likely Soto will prevail in the general election.

Congresswoman Val Demings waltzes to re-election in primary for CD 10:

U.S. Rep. Val Demings won her re-election bid against Democratic financier Wade Darius Tuesday night in the primary election for Congressional District 10. Demings, who's held office since 2016, made history in 2007 when she was named the first female police chief of the Orlando Police Department.

Because Demings had no Republican challenger, all registered voters – not just Democrats – were eligible to vote in the primary election, which determined the winner of the race. When all was said and done, the incumbent Democrat walked away with 75 percent of the vote against Darius, a first-time candidate. CD 10 covers parts of west Orange County, including Winter Garden, Apopka and Ocoee.

Because the county mayor is nonpartisan position, the election was won outright once Demings finished with at least 50 percent plus one vote. Demings achieved about 62 percent of the vote, according to the Orange County Supervisor of Elections. Prior to his three-term tenure as sheriff, Demings served as the county public safety officer and was the Orlando Police Department's first black police chief.

Orange County Mayor Teresa Jacobs handily beat her challengers for Orange County School Board Chair, according to returns from the Supervisor of Elections office. Jacobs, a Republican who was termed out of her mayoral position, received 52 percent of the vote, while school board member Nancy Robbinson came in at a far second, garnering almost 26 percent. Educators Matthew Fitzpatrick and Robert Allen Prater received about 17 percent and 5 percent of the vote, respectively.

Also on the ballot was a question asking voters if they supported an extension of a one mill local tax for public education. Orange County voters overwhelmingly approved an extension for this special property tax with almost 84 percent voters in agreement.

The remaining results from Orange County are below. Candidates who won their race are listed in bold:

In the following races, the top two candidates will be headed to run-off elections in November because no individual in the race received more than 50 percent of the vote: