The International Union of Painters lodge in Orlando reached its room capacity on Friday when a mass of Democratic candidates, including Tallahassee mayor and gubernatorial nominee Andrew Gillum and U.S. Sen. Bill Nelson, rallied voters to celebrate the progressive party's victories in the primary elections last Tuesday. To Democrats, the event was a much needed reunion. And with a newfound optimism on the coattails of Gillum's explosive primary success, other candidates, like Bill Nelson, will need to keep pace.

"I want you to know that we Democrats are going to be united as we take back the state of Florida," Gillum told a densely packed crowd of roughly 100 supporters at the Winning Ticket Campaign Rally. The event, hosted by the Florida Democratic Party, sparked verve for candidates and voters alike as the state heads into one of the most important midterm elections in recent history.

"I asked to be here so that I could introduce Andrew and say that all those things that Rick Scott has done in the last 8 years," Nelson said "We're gonna reverse that with Andrew Gillum." Gillum reciprocated, saying Nelson has "been a leader in all of the major fights that matter to us."

In his opening speech, Nelson complimented the gubernatorial nominee and recounted the time they both met for the first time.

Nelson, a three-term U.S. senator and former NASA astronaut, is running for re-election against Gov. Rick Scott, a conservative millionaire who for months has televised attack advertisements against Nelson during primary elections. Friday's event was Nelson's first major public appearance after a long, primary-season hibernation and, peppered with generous endorsements of Gillum, he struck back at Scott during his speech.

"You know the environment's at stake, you see what is happening with the algae," Nelson said, highlighting a list of environmental issues, including the oil industry's offshore drilling plans and climate change. The incumbent also derided the effect of Scott's policies on public education and healthcare. "You know what's happened to our public education system, you see how it has been drained of money over the last eight years."

"And low and behold," Nelson continued, "There's something that America has come to expect and that is that every person ought to have quality healthcare."

Calling out Scott's attempts to hamper the Affordable Care Act, Nelson assured the crowd that Gillum would expand Medicaid in Florida.

With his first television ad released, Nelson is getting into campaign mode. The victory rally he headlined was in a building owned by a painters union with over 500 employees working at Disney. They endorsed Nelson back in January.

"He's more for working people's issues, healthcare benefits, and the right to have a good retirement. A lot of these Republicans don't even come to the screenings," said Steve Hall, the statewide government affairs director for the International Union of Painters and Allied Trades, as a nod to Nelson and a blow to U.S. Rep. Ron DeSantis, Gillum's Republican opponent in the gubernatorial race.

Patty Farley, president of the Democratic Women's Club of Florida, is a longtime supporter of Nelson, but sees some hurdles in her candidate's way as he sets up for a showdown with Rick Scott in November.

"We have been supporters of him for a very long time, because he has been a supporter of Florida," Farley said. "And while he's kind of been in the background, right now there's an awful lot of stuff going on with television commercials that's just not true, and we're doing everything we can to combat the big money in this because we want him to have a fair shake."

Rick Scott's fundraising game surpasses Nelson's, as expected, and a large chunk of that money has gone to attack ads ripping Nelson for being a "career politician." Having spent nearly $30 million in the past year for his Senate bid, Scott is in line with a turbo-charged formula of Republican campaigning in a race poised to be the most expensive in the country.

Nelson on the other hand, seemingly avoiding the campaign spotlight during primary season, has spent roughly $6 million. 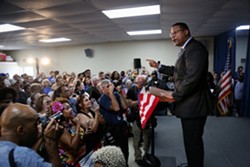 But in the primary race for Florida's governor, a candidate with the least amount of cash on hand garnered the most votes. Gillum's recipe for success might not translate to a U.S. Senate race, but some believe it's a lesson Nelson's campaign should heed. The 75-year-old senator packs a brand of centrism today's young voters don't seem to care for, which is why Nelson may need to depend on the ripples from a Gillum base enraptured by the prospect of universal healthcare and a $15 minimum wage.

"Millennials are the largest voting bloc in the country," Cass said in a phone call. "When they go to the polls, they vote for the most progressive candidate on the ballot."

Having endorsed Gillum in June, NextGen's some 125 employees across the state registered over 19,000 people to vote and knocked on 79,228 doors before the primary elections. Those numbers, Cass argued, is what handed the election to Gillum last Tuesday.

"We’ve learned through our program that young people don’t like to attach themselves to a particular candidate – they want to know what the candidate is going to do for the issues they care about," she said. 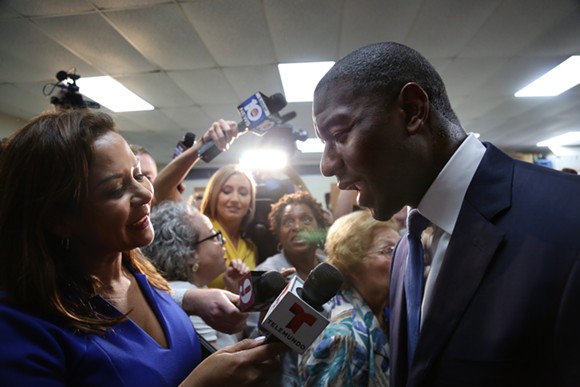 Even though Nelson himself is lacking a firm grip on the demographic, he may pick up millennial support in Gillum's wake.

"In the best of all worlds for Democrats, there will be some real synergy created between the new young, excited progressives and the stable, moderate cores," said Aubrey Jewett, a political science professor at the University of Central Florida.

"In some years the base of each wouldn't vote for the other, but in this year, with Donald Trump, I think the Democratic party is going to pull together no matter who's on the ticket."

Nelson's base – the baby boomer generation and moderate Democrats – is shrinking as a surge of young college voters and the so-called Generation Z bloc, galvanized by the March For Our Lives movement after the Parkland shooting in February, reaches voting age. Cass said given the choice between Scott and Nelson, any progressive would easily pick the latter.

But Scott is not the average challenger. As a two-term governor of Florida, he has built the name recognition that only incumbents like Nelson can usually use to their advantage. That means Nelson will have to fight a war against not only Scott's fundraising empire, but also the name he's built for himself in the past eight years in office – no matter how egregious his record may be.

"We're definitely in the midst of some changes in the political world, in terms of campaigning," Jewett added.

Gillum's primary upset – after polling mostly in third place and still in the midst of a scandal involving an FBI corruption probe into Tallahassee – proves that campaign trails in 2018 are volatile, sometimes expensive and increasingly unpredictable.

Without the aegis of a political powerhouse like NextGen or a loudly progressive "fresh face" campaign like 39-year-old Gillum's, Nelson will have to put in more work than he's used to. Whether he will be able to build himself a tenable grassroots campaign through November is uncertain.