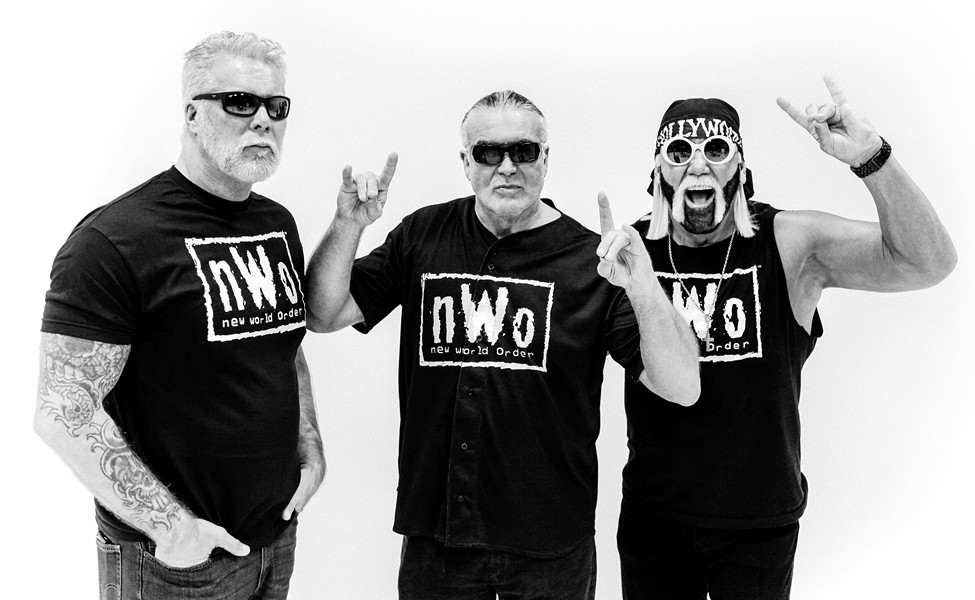 Since opening his beach shop ahead of last year’s WrestleMania, Hulk Hogan has worked to ensure Central Florida is the capital of professional wrestling.

After months of speculation and hints, Hogan confirmed a major wrestling event that once again puts Orlando at the forefront of the professional wrestling world. After nearly two decades, the infamous nWo will reunite for a special event next month at Mango’s Tropical Café on International Drive.

First debuting in 1996, the nWo saw Hogan take on a darker, more villainous tone where he flaunted his global fame and used the name “Hollywood Hogan.” Scott Hall and Kevin Nash, the other two founding members of the nWo, will join Hogan for the reunion. Hall and Nash teamed up in early 1996 for what would become known as the nWo. The storyline, now viewed as one of the most successful in professional wrestling history, saw Hall and Nash attempt a takeover of World Championship Wrestling in a storyline ripped from the real headlines of talks involving the acquisition of the WCW by the World Wrestling Federation.

Stretching across multiple seasons, the nWo storyline saw new members join and drama that included numerous factions within the group. Real life injuries by Hogan slowed the storyline of the group, which was already becoming very convoluted. Attempts to add new members didn’t help the group regain popularity, and the group was dismantled in early 2000.

When the World Wrestling Federation, the precursor to the WWE, finally did purchase the WCW in 2001 they attempted to reintroduce the nWo storyline, but a loss in the ring by Hogan saw him reject the group he once led. Within months the group was completely missing from the WWF storylines.

Hogan is known for his multiple entrepreneur ventures including his line of 80s style beach shops that are filled with wrestling memorabilia. The Orlando location of Hogan’s Beach Shop was supposed to open in the Hollywood Plaza next door to Mango’s Tropical Café, but a nearby retail store was used as a temporary location so the wrestling-themed beach shop could open ahead of the last year’s WrestleMania that took place at Camping World Stadium, formerly known as the Citrus Bowl. in the temporary location, the beach shop will be moving to the Hollywood Plaza in the coming months.

The nWo reunion will take place next door to the new location of Hogan’s Beach Shop at Mango’s Tropical Café. Currently, 100 tickets are being auctioned off for the event. Those VIP tickets will include priority seating to the Q&A session, a photo with the wrestling trio, and other exclusive benefits. General admission tickets for the tour kick-off will go on sale soon. Future dates for the “nWo Reunion – 2 Sweet Tour” have yet to be announced.

Mango’s is billing the specially ticketed event as the launch of their holiday season. A new prix-fixe menu option is debuting ahead of the holiday season with new additions to the Mango’s dinner show including tributes to Selena, Amy Winehouse, James Brown, and a segment based on Camila Cabello’s “Havana” song.

Details on the opening date of the new much larger Hogan’s Beach Shop and the Hollywood Plaza are still unknown, but the art deco plaza and garage are to open sometime this fall, likely around the same time as the nWo reunion event. The $30 million Hollywood Plaza and parking garage will help usher in a new era for the entertainment complex. Once it opens, Mango’s will be able to use their rooftop bar area, which due to parking requirements, has remained closed since the restaurant and club opened. Hulk Hogan has previously announced plans for turning the beach shop concept into an interactive attraction. More details regarding those plans will likely be announced at the October event. Also, expect an increase in nWo merchandise at the beach shop ahead of the reunion tour.

An auction for the VIP tour tickets is now open on Hogan’s website.