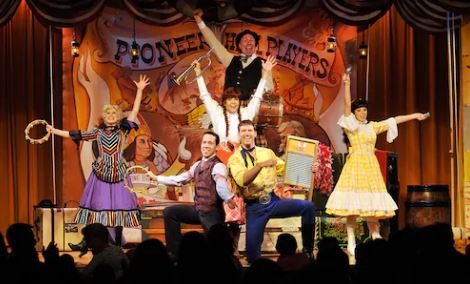 The Hoop-Dee-Doo Review, found in the lakefront Settlement village at Disney’s Fort Wilderness Resort & Campground, has remained mostly untouched over the years. The comedic old west-style dinner show is a must do for many Walt Disney World guests.

Running almost every night since its debut in 1974, the vaudeville-style show is viewed as the longest continuously running musical in American theater history and remains one of the most popular shows in the nation. That is why a recent rumor of its demise came as a shock for both Disney and theater fans alike.

After numerous sites began reporting on the show shutting down, Disney was quick to issue a statement confirming that it would remain, with no current cancellation plans. The correction by Disney came after the well-known Disney news site The Dis posted a story where they quoted multiple “reliable sources” saying the show was closing.

Disney’s correction, which they shared directly with The Dis, only confirmed the Hoop-Dee-Doo was remaining open but the original rumor, as covered by The Dis and others, also included the nearby Mickey’s Backyard BBQ character dining experience. The omission of Mickey’s Backyard BBQ from the statement by Disney is fueling fire that the character-driven Backyard BBQ dining experience is in fact closing. Disney’s website also has no listings for the show after the end of the year.

Both Hoop-Dee-Doo and Mickey’s Backyard BBQ share some back of house support. Hoop-Dee-Doo takes place next door to the Trail’s End restaurant in the log cabin style Pioneer Hall. The venue Hoop-Dee-Doo calls home was initially designed to be an additional dining room for the restaurant while also providing a spot to host nature documentaries screenings, lectures, and other nature-focused events. Hoop-Dee-Doo opened with the venue. Mickey’s Backyard BBQ is found just to the west of Pioneer Hall in the Pioneer Pavilion. This open-air picnic pavilion also hosts private functions when the BBQ-themed character dining isn’t taking place.

The Pioneer Pavilion and the nearby long closed River Country water theme park are both within the work boundaries of permits Disney filed earlier this year for what is believed to be a new Disney Vacation Club resort along the shores of Bay Lake. While still unconfirmed highly detailed plans for the resort were leaked years ago with the permits filed earlier this year seem to match those leaked plans.

Original plans for the mostly undeveloped land called for a resort themed to an old west-style town with a live dinner show similar to the Buffalo Bill show found at Disneyland Paris. The leaked plans for the new resort do not include any large dinner show-style venue, but the resort would be walking distance from the Fort Wilderness Pioneer Hall.

Even with four new hotel towers in the works at Walt Disney World, there is still some concern about WDW meeting the hotel room demand during the 50th Anniversary in 2021 and in the years following when significant new additions are planned for Epcot. With an estimated three year timeline the new DVC anchored hotel won’t likely open ahead of the 50th Anniversary but may open during or soon after it. That would mean construction on the hotel would need to begin very soon, explaining the closure of Mickey’s Backyard BBQ. The development of the new hotel may also impact Pioneer Hall, which may be what led to the rumors of its closing. If the new hotel does happen, it looks like Disney is hoping to minimize the impact on Pioneer Hall’s dining venues.

We did see another closure at WDW recently. The Sammy Duval’s Watersports Centre, located at the Contemporary Resort, closed at the end of August. This third-party vendor is who provided parasailing and other water sports activities on Bay Lake. One reason for the closure may be to an upcoming increase in boat traffic on the lake related to the construction of the rumored new resort, though the timing of Sammy Duval’s closing seems aggressive when compared to Mickey’s Backyard BBQ timeline.

Disney has been adding more character dining experiences across WDW in recent years so the closure would be surprising. One possible solution to keep Cowboy Mickey and Friends around is to add them to Hoop Dee Doo Review, though this addition might prove unpopular with many die-hard fans of the dinner show.

Despite the lack of availability for Mickey’s Backyard BBQ come January, it hasn’t been confirmed to be closing, but Disney has also gone out of its way to not include it in their statements rejecting other rumored closures. The rumors, closings and permits all seem to indicate something is afoot at the Fort Wilderness Settlement, but for now, Disney still seems very unwilling to announce just what it may be.