We now know the name of Disney World's new lounges, which cost $33,000 to access

The Florida chapter of Disney’s infamous members-only club known as Club 33 is already operating at both Epcot and Hollywood Studios, with lounges wrapping up construction at the Magic Kingdom and Kingdom.

The ultra-exclusive club requires a $33,000 initial membership fee to join, followed by $15,000 annual dues. For that price members are provided a premier passport for themselves, their spouse, and any children under age 26; 50 one-day park hopper tickets; five daylong VIP guided tours; an undisclosed number of instant FastPass+ reservations; access to private concierge services similar to those offered to certain hotel guests, and access to all four Club 33 lounges found at Walt Disney World.

The lounges are located in each of the Florida theme parks with no signage and entrances not obvious to non-club guests. 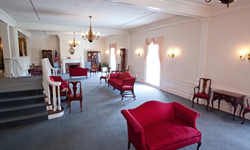 The salon at Hollywood Studios opened earlier this year in an unused area near The Hollywood Brown Derby restaurant. Epcot’s location is also now open in an American Adventure space formerly used as a sponsorship lounge, mostly recently for Chase Visa card members.

The final Club 33 lounge is found in the Animal Kingdom and is expected to open next year. Early rumors indicated that the lounge would be placed in Dinoland, but insiders now confirm the location will be in the Africa area of the park. The space in Dinoland where the lounge was rumored to be going is now open as a temporary trial bar for regular guests.

Recently Orlando tourism news site Orlando Theme Park News reported on the names for each of the new lounges. The Hollywood Studios location, themed to an awards ceremony green room, is already known as the Spotlight Lounge. Epcot’s parlor has already opened but ongoing updates, including new decor, are happening. The lounge there will be known as the Constellation Club. With Skipper Canteen-style decor and located next door to the Jungle Cruise-themed restaurant, the Magic Kingdom’s lounge will be known as the Captain’s Quarters. The Animal Kingdom’s lounge will be named Harambe House.