The Orlando Magic revealed a fresh look at their future plans for a downtown entertainment complex across from the Amway Center.

The project, which is set to be completed in 2021, will cost at least $200 million but is projected to go above initial estimates, according to the Orlando Sentinel. Representatives for the Magic say the entertainment complex will "create jobs and provide dining, hotel, living, and entertainment options."

The design includes a 250-room luxury hotel; 200,000-square-foot building with seven stories of office space that will be the Magic's new headquarters; 300-unit multi-family residential tower; 100,000 square feet dedicated to retail space; 80,000 square feet for event space; and an open-air plaza featuring "the latest in WiFi, lighting, audio and digital experiences," according to release from the Magic.

The project is currently looking for office and retail tenants for these new spaces, and both Foundry Commercial and JLL are helping in that effort.

"Like with the Amway Center, this has been several years of planning and working with the City to find the right avenue to add another iconic destination that will add to the core of downtown," Magic CEO Alex Martins said in a statement. "We look forward to entering this new stage as we work with our partners to make Orlando a great place to live, work and play."

For those of you who hear the gentrification siren blaring a mile away, the Magic says the investment in the entertainment complex is part of their efforts in the "revitalization of downtown Orlando and the Parramore neighborhood," which includes giving more than $1 million to the Parramore community. The DeVos family, which owns the Magic, has made revitalizing downtown and Parramore a priority since the day the Amway Center was first contemplated, he added.

"The very first time we met with our architects along with the city to design the Amway Center, the very first design had a development right across the street from the Amway Center," Martins said in a statement. "Both the DeVos family and the mayor were very motivated by that. … The DeVos family made the original commitment to purchase the land from the city, and they’ve made the commitment to rebuild the homeless shelter for the Orlando Union Rescue Mission and to expand the services that the rescue mission are going to be able to provide here in downtown."

Martins said the entertainment complex was an "opportunity to spark the western side of that stretch."

"It's our neighborhood and it’s important to us that we continue to help revitalize it," Martins said. "We think this is another significant step. Like the great addition of Orlando City Soccer’s stadium, hopefully this is a spark for others to invest in that part of downtown."

The next step in the process for the Magic to start building their revised entertainment complex would be to submit their plans with the City of Orlando to determine if any actions may be needed to accommodate the development, said Jessica Garcia, a spokesperson for Mayor Buddy Dyer's office.

"Based on renderings depicted in recent news articles, their proposed changes may require amendments to their existing planned development ordinance," Garcia said. "If changes … are needed, they would be considered by the Municipal Planning Board and then would have two readings at City Council. Also, as with most development in downtown, the development’s appearance review would be reviewed by the Appearance Review Board."

Garcia added that the city could not anticipate a timeline for when the Magic's plans could be approved if action is required. 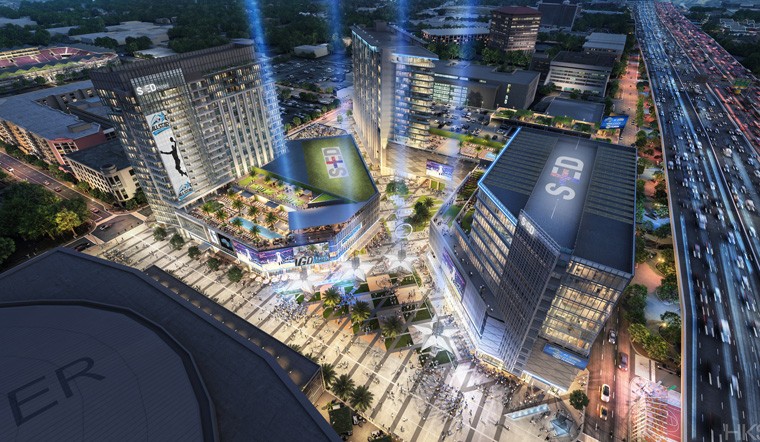