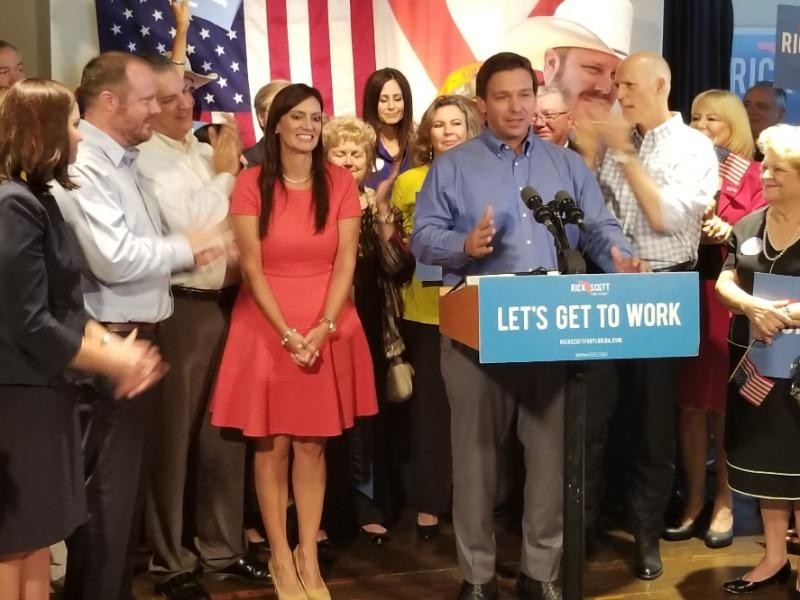 State Rep. Jeanette Nuñez, a Miami Republican who publicly criticized President Donald Trump during the 2016 campaign, was formally announced Thursday as the running mate for gubernatorial candidate Ron DeSantis, as the GOP’s statewide election slate held a display of unity.

DeSantis, a congressman with close ties to Trump, dismissed talk of Nuñez’ initial preference in the 2016 presidential race as he described his lieutenant-governor selection as an “accomplished” mother of three who is someone his daughter could admire.

“This is the type of person that I think is a role model for everybody, but particularly young women,” DeSantis said after the unity event put on by Gov. Rick Scott’s U.S. Senate campaign at the Ace Cafe in Orlando.

The Nuñez selection could help DeSantis, who will face Democrat Andrew Gillum in the November election, as Republicans try to attract women and Hispanic voters. Gillum on Thursday named Winter Park businessman Chris King, who lost in the Democratic gubernatorial primary, as his running mate.

Nuñez, 46, is a Cuban-American born in Miami who has served as a top lieutenant to House Speaker Richard Corcoran, R-Land O’ Lakes, during the past two years.

Nuñez, who was first elected to the House in 2010 and faces term limits this year, said she was “honored” by her selection as DeSantis’ running mate.

“We’re going to see from our end what we stand for, the ideals and principles that we stand strong in, the conservative values making sure Florida remains the prosperous state that it continues to be,” Nuñez said. “I’m eager to get on the trail and explain what the differences are.”

Nuñez was a sponsor in 2014 of legislation to help “Dreamers,” or children who are in the country illegally, qualify for in-state tuition rates at Florida colleges and universities. In 2018, she oversaw the House’s response to Hurricane Irma and was appointed by Corcoran to the Constitution Revision Commission, which meets every 20 years to consider changes to the state Constitution.

Among her proposals while serving on the commission was a measure that would have eliminated a constitutional requirement that 30 percent of tobacco-education and prevention funding go to an anti-smoking campaign. That proposal ultimately did not pass.

State Sen. Debbie Mayfield, a Rockledge Republican who was also on DeSantis’ short list of potential running mates and attended Thursday’s event, said Nuñez will bring a strong “women’s voice” to the ticket and office.

“We all knew that we really needed to balance the ticket out,” said Mayfield, who previously served in the House with Nuñez. “Ron’s going to be a tremendous governor. He’s going to continue on the same path that Gov. Scott has. But I also think he’s going to be focused a lot on education and health care. Jeanette brings a lot to the table with her experience with health care and education.”

Before being elected to the Legislature, Nuñez was a lobbyist for Jackson Memorial Hospital. She later joined Hospital Corporation of America as a vice president of community affairs in South Florida.

Ed Moore, president of the Independent Colleges and Universities of Florida and a veteran Republican pundit, said Nuñez "enables DeSantis to have a different look to the ticket."

"Jeanette Nuñez is a very experienced legislator, very well-known in Miami-Dade County, a Hispanic female," he said. "So, if you’re checking off a lot of boxes, she checks a lot of boxes."

Moore added that the selection of the lieutenant governor gives the top-of-the-ticket candidate "an immediate three-day pop" that can illustrate "the decision-making quality of the campaign."

"But then after that, it’s all ground game and whether the lieutenant governor has an organization or not. Most of them don’t,” Moore said. “They’re very regional in nature. … It’s just not that big of a deal."

Even before the lieutenant-governor selection was formally announced, Democrats criticized the DeSantis-Nuñez ticket. They described such a Republican administration as a potential “disaster for Florida women and working families.”

Democrats also highlighted a March 3, 2016 tweet by Nuñez, who supported U.S. Sen. Marco Rubio, R-Fla., in that year’s GOP presidential primary. In the tweet, she expressed strong criticism of Trump, who went on to win the Republican nomination and the presidency.

DeSantis and Nuñez downplayed her initial support for Rubio in 2016.

“We’re here talking about moving Florida forward,” Nuñez said after the Ace Cafe event. “It’s no secret that I was a strong Marco Rubio supporter. But that election is done, and I’m looking forward to this election.”

“To support Marco Rubio, a favorite son from Miami, Cuban-American, with a historic run, if I was in her shoes I would have probably been supporting Marco as well,” DeSantis said.

DeSantis defeated state Agriculture Commissioner Adam Putnam in the Aug. 28 Republican gubernatorial primary. Putnam was at Thursday’s event and described Nuñez as an “exceptionally good pick” who knows policy, as they have worked together on energy issues.

“She’s someone I’ve been a big fan of for a long time,” said Putnam, who said he hasn’t given much thought to what he’ll do when his term as agriculture commissioner expires in January.

In describing the statewide ticket, Scott, who is trying to unseat Democratic U.S. Sen. Bill Nelson, said the choice is between “job growth,” “low unemployment,” “secure borders” and “lower taxes,” against the Democrats’ “radical, left-wing policy that led to what we’re seeing today in places like Venezuela and Cuba.”