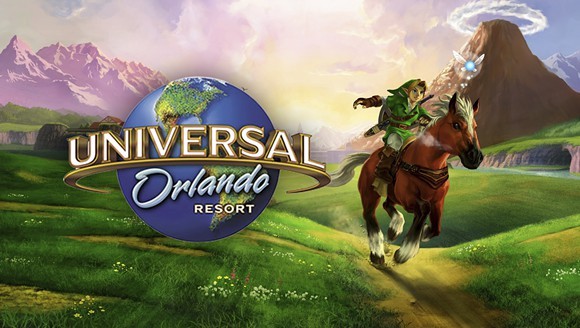 As Universal ramps up its aggressive plan to take on Disney, seemingly by the day we’re learning more of what the yet-to-be-announced third theme park will include.

With the new park now being the supposed home of Universal Orlando’s already announced Super Mario World, the timeline for Mario and friends has been pushed back sometime post-2021. With the delay for Mario and Donkey Kong, Universal is looking at adding other big names to the parks ahead of 2021 in an attempt to compete with Disney World’s bank-busting additions. The fight between Disney and Universal over the next few years will likely be the biggest fight Universal has seen in decades.

Now, according to Josh Young of Theme Park University, Universal is looking to tap another Nintendo intellectual property for a major new addition at one of their existing theme parks ahead of Disney’s big 50th anniversary.

In a blog, Young lays out what he claims is Universal’s plans for Nintendo’s Zelda brand. The post claims Universal intends to create a new Zelda-themed land within Islands of Adventure. The new Zelda land would replace what is left of the Lost Continent. That land was initially much more extensive but was cut in half when Universal used the back half of the land for the original Harry Potter-themed area, what is now known as The Wizarding World of Harry Potter – Hogsmeade. The Lost Continent will also lose its' main attraction, the Sindbad stunt show, when it closes later this month leaving only a walkthrough attraction, Poseidon’s Fury, and a sit-down restaurant, Mythos, as the primary for the land.

Zelda being added to Islands of Adventure isn't a new rumor but what is new is both the specific timeline and confirmation of the location.

Young lays out a timeline that includes another a rumored addition, a coaster in the Jurassic Park area, with the Zelda themed land opening in 2021 a year after the Jurassic Park coaster. This would line up with the thought that Universal plans to take on the 50th Anniversary celebration at Walt Disney World headfirst. There were previous indications that Universal planned to lay low during 2021 with considerable additions coming soon after but it now looks like Universal has realized that could cost them so instead they’re planning major new additions of their own with at least one substantial addition per year per park.

Little is known regarding the Zelda themed land, but Young was clear in his post that a new attraction was in the works for the land. Since the Theme Park University post was published, various other insiders have confirmed the Zelda plans now look to be moving forward.

It’s thought that the Zelda themed land will include a mix of ideas developed for a smaller Zelda mini-land slated for the original Super Mario World and from former ideas found in other previously planned attractions, including ones involving a Lord of the Rings attraction. In leaked documents of the original plan, the Zelda mini-land had a Hyrule Castle attraction, a forest village, an interactive play area, and a large Deku tree.

Other possibilities for the new Zelda land include a simple overlay of Poseidon’s Fury and keeping the Mythos dining room, one of the most themed of any in all of Orlando, mostly intact.

The rumor also seems to confirm that the rumored Mount Crumpet coaster, that was at one time thought to be replacing Poseidon’s Fury, is either dead or at least moved from where it was initially planned. With the family coaster now highly rumored to be in the works for Jurassic Park the Suess coaster is not as needed.

With the construction of Islands of Adventure’s new Harry Potter-themed rollercoaster slated to open next year now well underway, new details on Universal’s 2020 and 2021 plans should begin being released in the coming months. If the Zelda updates to Lost Continent are of any size, we should start seeing permits for them very soon.