Isaac is now the 5th hurricane in the Atlantic 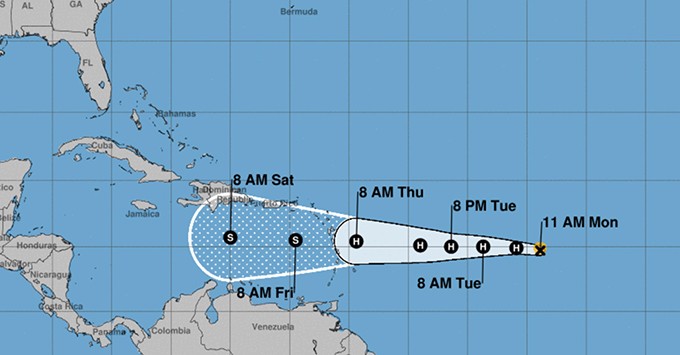 According to the National Hurricane Center, Isaac now has maximum sustained winds of 75 mph and is currently westward towards the Lesser Antilles and Eastern Caribbean as of early this morning.

Though Isaac is expected to weaken before making landfall and return to a Tropical Storm by late Thursday, many of the islands are still rebuilding following Hurricane Maria and are expected to experience heavy rain, winds, rough surf and increased rip currents in the oncoming days.

Should Hurricane Isaac begin to grow, islands beyond the Lesser Antilles such as Puerto Rico, Haiti and the Dominican Republic will brace themselves for the possibility of weathering another storm.

"Isaac is a small hurricane and uncertainty in the forecast is higher than normal," the National Hurricane Center said. "Although Isaac is forecast to begin weakening when it approaches the Lesser Antilles, it is still expected to be at or near hurricane intensity when it reaches the islands."