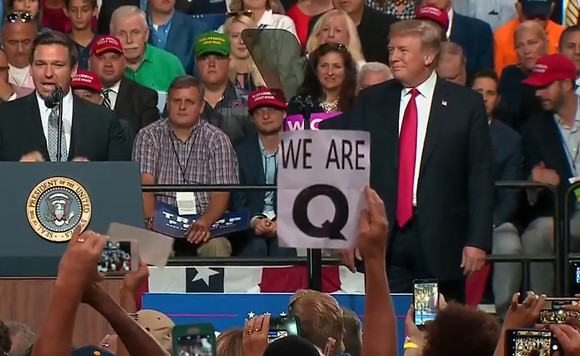 The Orange County Republican Party has turned into a slow-burning dumpster fire over the past couple of weeks – and they just continue heaping more and more trash onto the pile.

(If you need an example of their batshittery, the group believes Special Counsel Robert Mueller is actually working with President Donald Trump to expose Democrats running child sex rings.)

In other words, QAnon is a twice-removed cousin of the Pizzagate conspiracy born of Reddit and the 2016 presidential campaign, made up of a collective of tinfoil hat-wearing Internet trolls and pseudo-detectives.

The Orlando Sentinel reported Friday morning that Marin responded to requests for comment by saying that the posts were intended to start a dialogue, and not to promote any views. According to the Media Matters for America, Marin shared several posts mentioning QAnon, one of which included this headline, which Marin reportedly posted twice: "Treason: QAnon exposes Obama/Hillary 16-year coup d-etat plan."

Not even two months after the Feb. 14 mass shooting at Marjory Stoneman Douglas High School in Parkland, Marin also reportedly posted on his personal Facebook page and on Twitter a QAnon article that raised this question in the caption he provided: "Does this stunning email indicate Parkland shooter was just another FALSE FLAG designed to take YOUR guns?" Marin wrote. ("False flag" is conspiracy theorist code for a government-staged crisis. The term actually originates from naval warfare and is a legitimate military tactic.)

Other controversial posts shared by Marin include a story claiming the innocence of the man charged with driving his car into a crowd, killing 32-year-old Heather Heyer in the process, during the August 2017 Unite the Right protest and counter-protest in Charlottesville; and a story claiming Hillary Clinton was involved in the murder of former Democratic National Committee staffer Seth Rich, whose death is believed to have been a robbery gone wrong but is still under investigation.

Orlando Weekly has reached out to Marin for additional comment and will update this story if and when he responds.