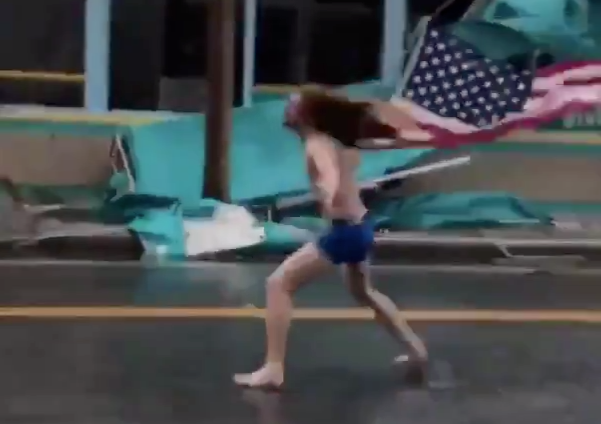 Lane Pitmann, a Jacksonville resident who went viral a couple years ago for head-banging to Slayer's "Raining Blood," while shirtless during Hurricane Matthew, has re-emerged for Florence.

Today, Pittman posted a similar video of himself to Twitter, but this time in Myrtle Beach, South Carolina, along with the caption "YOU ARE WEAK AND SMALL FLORENCE!!!!! FLORIDA MAN IS HERE!!!!!"

Pittman traveled all the way to South Carolina to make the video after a GoFundMe campaign was created to pay for the gas and coffee. "The Cane must be Slain," wrote Anthony Wood, who donated $15.

A reporter with Fox News spotted Pittman in the wild while he was filming and caught another perspective of the video.

Me: what are you doing? There is flying debris
Half naked man: I went viral a few years ago doing this.#FlorenceHurricane2018 #viral #americanflag pic.twitter.com/6ofFVQswH1

You may remember Pittman from our story a few years back, when he shredded the National Anthem so hard on the 4th of July, cops were forced to arrest him for breaching the peace.

Those charges were later dropped.