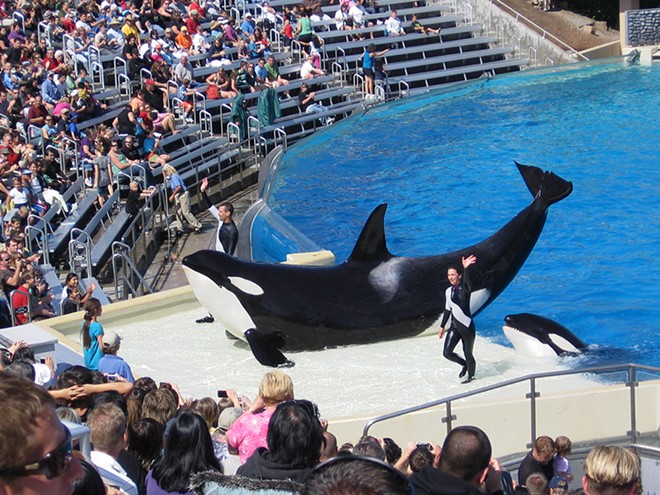 SeaWorld Entertainment and its former CEO have agreed to pay more than $5 million in fines to settle federal charges accusing the theme park company of misleading investors by downplaying the impact of the anti-captivity documentary Blackfish.

The U.S. Securities and Exchange Commission announced Tuesday that SeaWorld and its former CEO Jim Atchison reached settlements with the agency without "admitting or denying the allegations." The SEC complaint charged SeaWorld and Atchison with violating anti-fraud provisions of the federal securities laws and additionally charged the company with reporting violations. SeaWorld will be paying a $4 million penalty, while Atchison will pay over $1 million in penalties.

"The company is pleased to have resolved this matter and to continue to focus on delivering superior guest experiences, world-class animal care and rescuing animals in need," SeaWorld said in a statement. "The company cooperated with the Commission throughout the process and the Commission approved the settlement."

As the film became more widely distributed, the SEC alleged that from December 2013 to August 2014, SeaWorld and Atchison made "untrue and misleading" statements or omissions to investors in SEC filings, earnings releases, calls and other statements to the media regarding the documentary's impact on SeaWorld's reputation and business.

Despite the documentary's influence, it took SeaWorld more than a year after its release to finally admit on Aug. 13, 2014, that declining attendance was partially caused by negative publicity. The acknowledgement caused the company's stock price to fall about 33 percent, leading to a loss of about $830 million in shareholder value, according to the SEC complaint.

"This case underscores the need for a company to provide investors with timely and accurate information that has an adverse impact on its business," said Steven Peikin, co-director of the SEC Enforcement Division, in a statement. "SeaWorld described its reputation as one of its 'most important assets,' but it failed to evaluate and disclose the adverse impact Blackfish had on its business in a timely manner."