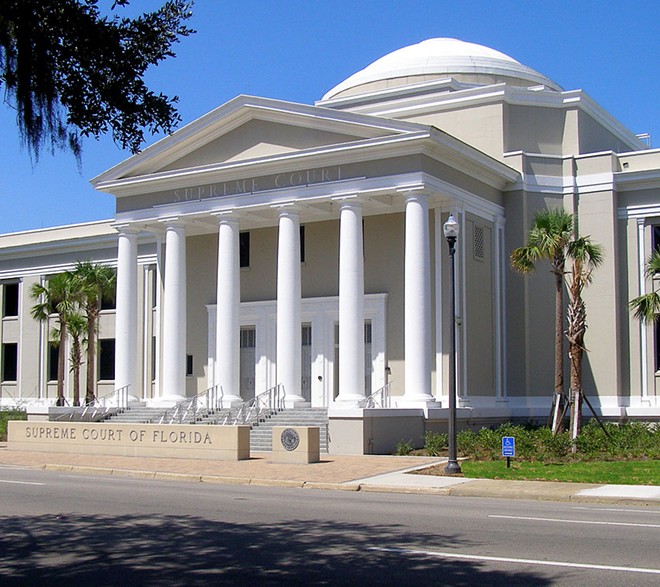 In a widely anticipated move, two voting-rights groups asked the Florida Supreme Court on Thursday to block an attempt by Gov. Rick Scott to appoint replacements for three justices whose terms will end as the governor’s tenure comes to a close in January.

Scott this month initiated the selection process to replace justices Barbara Pariente, R. Fred Lewis and Peggy Quince, who will be forced to leave the Supreme Court in January because of a mandatory retirement age.

Scott is running for U.S. Senate this year, and his successor as governor will take office in January. The key question is whether Scott or his successor should have the power to appoint the new justices.

The outcome of the case could shape the makeup of the Supreme Court for years, if not decades. Pariente, Lewis and Quince are part of a liberal bloc, which now holds a slim 4-3 majority, that has thwarted Scott and the Republican-dominated Legislature on numerous occasions since the governor took office in 2011.

Thursday’s challenge by the League of Women Voters of Florida and Common Cause mirrors a lawsuit the groups filed last year, asking the court to prohibit Scott from filling judicial vacancies that are caused by terms expiring in January 2019.

In December, the Supreme Court dismissed the lawsuit, saying it was too soon to rule on the issue.

But since Scott “has now acted on his stated intention” to appoint the three justices and has set the process in motion, the groups Thursday asked the high court for a “writ of quo warranto,” which is used to determine whether a state officer or agency has improperly exercised power.

Scott on Sept. 11 directed the Supreme Court Judicial Nominating Commission to begin a process that includes accepting and reviewing applications, interviewing candidates and making nominations for appointment. The deadline for applications is Oct. 8, and the commission will have until Nov. 8 — two days after the general election — to submit a list of candidates to the governor.

In announcing that Scott had initiated the nominating process, his office said Scott would invite the governor-elect to interview the court nominees after the general election. The governor’s office pointed to an “expectation” that Scott and his successor would be able to agree on appointments.

If that happens, it would follow the lead of outgoing Democratic Gov. Lawton Chiles and Republican Gov.-elect Jeb Bush in late 1998 agreeing to appoint Quince to the Supreme Court.

But the chances of reaching agreement could hinge heavily on the outcome of the Nov. 6 gubernatorial election between Democrat Andrew Gillum and Republican Ron DeSantis. Gillum is running as a progressive Democrat and, if elected, might have a hard time reaching agreement with the conservative Scott. The new governor will take office Jan. 8.

"In our understanding of the Constitution, the next governor will appoint the next three Supreme Court justices,” Gillum’s campaign said in a statement after Scott initiated the Judicial Nominating Commission proceedings.

In Thursday’s filing, lawyers representing the voting-rights groups wrote that Scott “made clear that he will purport to unilaterally make the appointments if the governor-elect does not agree to grant him veto power over the appointments, despite his previous concession to this (Supreme) Court that he will have no such authority.”

One of the key arguments in the case surrounds exactly when the terms of Scott and the justices end.

The League of Women Voters and Common Cause maintain that the judicial vacancies do not occur until after the outgoing justices' terms expire at the end of the day on Tuesday, Jan. 8. That is also the day Scott's successor will take office.

Even if the justices' terms run out earlier in the day, Scott still doesn't have the authority to appoint the judicial replacements, John Mills, a lawyer representing the plaintiffs, argued in November. That would be up to the new governor, who will almost certainly be sworn in immediately after midnight on inauguration day, the plaintiffs argued, pointing to what happened when the last three governors assumed office.

And, they wrote, Nordby also said “the winner of the 2018 gubernatorial election would have the authority to fill those vacancies,” unless he fails to file the oath of office in advance or agrees to cede his authority to Scott.

While the court dismissed the previous case because it wasn’t yet “ripe,” the “governor has now acted,” the lawyers wrote.

Scott’s “attempt to require the FSC JNC (Supreme Court Judicial Nominating Commission) to convene and, more importantly, to set a deadline for nominations is unquestionably beyond his authority,” something that the governor’s own lawyer admitted, Mills and Hall wrote.

Allowing the nominations to be made “before the vacancies occur” would also “cause undue and unfair hardship on potential applicants,” they wrote.

“The November 10 deadline Governor Scott purported to impose has required the FSN JNC to set the deadline for applications well before the general election,” they argued. “This is unfair and untenable in any gubernatorial election year — this one most of all where three seats on this court are at stake — because potential applicants should be able to know the identity of the governor making the appointments and, more importantly, what kind of characteristics he is looking for in making appointments so they can have a sense of whether they have any realistic chance of being appointed before undertaking the arduous and intrusive gauntlet of applying.”

In a statement issued in response to Thursday’s lawsuit, Scott reiterated he wants to work with the incoming governor to fill the appointments.

“It’s disappointing that these partisan groups filed a politically-motivated lawsuit that would create three prolonged vacancies on the Florida Supreme Court, contrary to all historical practice. The governor is following precedent set by Governor Chiles and has said in good faith that his expectation is that he and the governor-elect will agree on the selection of three new justices,” Scott spokesman John Tupps said in an email.