A year ago, Jarlier Figueroa Sevilla remembers looking up at the calm sky from his home in Manatí, Puerto Rico as the eye of Hurricane María passed over his home.

"It was so peaceful," he recalls in Spanish. "Just before, I had seen roofs fly. I had seen my son's face, terrorized before the storm."

That day, Sept. 20, changed the lives of Figueroa Sevilla, his family and millions of people who lived on the U.S. territory. The catastrophic storm tore through buildings and roads, shut down power on the entire island and cut off residents from communication. Those who didn't die during the hurricane suffered for months in the aftermath of the storm from emotional distress and lack of food, water and medical attention. The estimated death toll recently adopted by the Puerto Rican government stands at 2,975 fatalities, and despite all evidence, President Donald Trump has disputed that figure.

Like tens of thousand of people who fled the island, Figueroa Sevilla and his family evacuated to Central Florida. He joined an advocacy group called Vamos4PR Action to fight for shelter voucher extensions under FEMA, affordable housing and resources for displaced Puerto Rican families who ended up in motels.

"I am here today with the engine that is my family," Figueroa Sevilla tells mourners at Iglesia Episcopal Jesus de Nazaret in remembrance of everything taken by the hurricane. "They motivate me every day. … Vamos a echar pa'lante. We are all one identity. We are all brothers during the hard times to help each other."

Close to 200 people gathered at the Orlando church Thursday on the one-year mark of María's destruction to honor the dead and celebrate the resilience of those who survived despite what advocates say was neglect from the federal government. The vigil also honored María "Betzy" Santiago Burgos, a woman who fled the hurricane to Kissimmee and strived to get her family out of the motel life but was murdered by a friend in May.

In between speeches from U.S Sen. Bill Nelson, Rep. Darren Soto, other elected officials and survivors, there was a performance of bomba, a musical style and dance created centuries ago as a form of resistance by enslaved Africans who worked on the island's plantations.

State Sen. Victor Torres remembered traveling to the island in the days after María with his daughter, Rep. Amy Mercado, to check on family. When they arrived in Puerto Rico, the first thing Torres remembers his uncle saying was "We have no water. There's no electricity." Torres and Mercado gave him the little supplies they had.

Puerto Rican evacuees who fled to Central Florida found work, Torres says, but often could not attain affordable housing, especially in Orlando and Kissimmee. The storm highlighted the disconnect between the island and mainland, but despite these struggles, Mercado noted that displaced survivors in Florida banded together to demand their voices be heard.

"Strangers have become friends, and friends have become family," Mercado says in Spanish. "You have seen adversity in your experiences and have become incredibly ingenious and more powerful in your lives. The island wasn't the only thing changed – so were your hearts." 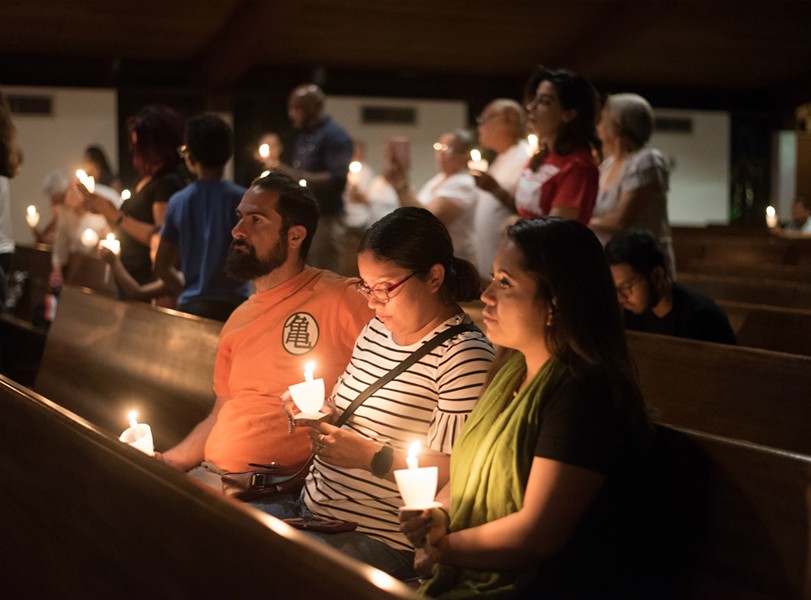 Marieliza Figueroa says she and other Puerto Ricans never expected to suffer so much in María's destructive aftermath. She came to Florida knowing no one but soon got involved with Vamos4PR Action and even went up to Tallahassee to convince state lawmakers not to raid millions from the Sadowski Affordable Housing Trust Funds (They did anyway).

Still, Figueroa tells the crowd she's proud of the community she's built here and their fight continues for affordable housing and resources.

"It's not easy, but we can achieve this," she says. "We're strong. We have a union as family and as a people to struggle for something better."