Last year it looked pretty set in stone that Epcot would be receiving two new countries in the World Showcase, as part of the park’s estimated $2 billion update.

Both Brazil and Spain were all but announced for the Disney World’s second theme park. Plans for Spain stretch back to the early 1980s, before the park was even open, but it was finally moving forward thanks in part to a major new Disney film, Gigantic, which would be loosely based in Spain.

Combining the creative geniuses behind Tangled, Inside Out, and Frozen seemed like a sure bet for a Disney.

Then in October Disney announced that the film was being shelved for the time being. With the movie as the primary force behind the new World Showcase pavilion, the decision to cancel the film meant Disney Imagineering had to quickly find an alternative if they wanted to stay with the original idea of two new countries, with one featuring a signature family-friendly E-ticket level attraction.

The Brazil pavilion may include a ride, but if that attraction does happen it, which insiders have stated has yet to be approved, it will likely be a less expensive mid-range dark ride similar to Peter Pan or the former El Rio del Tiempo. The primary focus of the Brazil pavilion is thought to be a new churrasco restaurant with the majority of the land devoted to dining and retail. 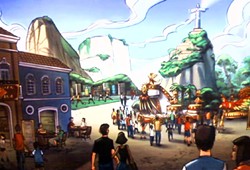 To add an E-ticket level attraction to the Brazil pavilion now would require a significant reimagining of the land that is thought to be nearing groundbreaking within the next 12 to 18 months.

Instead, Disney now looks to be moving forward with an entirely new country to replace Spain with the plans for the Brazil pavilion remaining mostly untouched.

Rumor and news site WDW News Today began reporting last week that Disney is looking at possibly adding India to the World Showcase. Much like Spain, India has been rumored for Epcot since the 1980s, though unlike Spain, it has never been officially announced for the park.

The signature feature of the new pavilion would be an indoor trackless boat ride, similar to the award-winning Pirates of the Caribbean attraction found in Shanghai Disneyland, themed to the live-action Jungle Book films.

A sequel to the first film is in the works, though no release date has been announced. The same attraction was previously rumored for the Animal Kingdom, but now it looks like Disney is instead seeing if it could be a fit for Epcot where they hope it can fill the void left by the Gigantic’s cancelation. According to WDWNT, Disney might film video segments for the ride at the same time as the new film. This approach has proven successful for Disney in the past with California Adventure’s Guardians ride and numerous Marvel attractions having a similar movie and ride filming schedule.

The Shanghai Pirates ride is unique with its next generation boats that move forward, backward, and stop automatically at various scenes where screens are fused seamlessly with real life sets creating hyperreal visuals. The Jungle Book ride would be a mix of screens and real-life sets, similar to Animal Kingdom’s Na'vi River Journey, though much more technologically advanced than that attraction.

Over in the Animal Kingdom, other plans are in the works for major new additions in the coming years, though like the new World Showcase pavilions, none of those plans have yet to be announced.

Epcot’s future is thought to be a primary focus of the upcoming D23 Expo in August 2019. Many of the projects expected to be announced there won’t open until the mid to late 2020s with most of the attractions that will open ahead of the resort’s 50th Anniversary in 2021 already under construction around Walt Disney World.