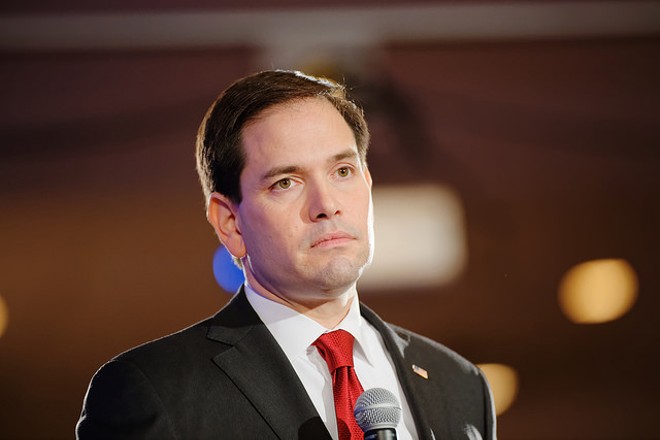 Despite agonizing on and on about the heartbreak they felt listening to Christine Blasey Ford describe how U.S. Supreme Court nominee Brett Kavanaugh allegedly smothered her screams and tried to rape her, Sen. Marco Rubio and Gov. Rick Scott would still choose to confirm him anyway.

In one of his most long-winded, hypocritical statements to date, Rubio says that "anyone who comes forward claiming to be a victim of sexual harassment, abuse or assault should be taken seriously and have their claims heard," except for when – you guessed it – that victim stands in the way of someone who's actually important.

"Under a sworn oath, Dr. Ford has offered testimony that was unequivocal, compelling and heartbreaking," Florida's Republican senator says. "Under a sworn oath, Judge Kavanaugh offered a denial that was equally unequivocal, compelling and heartbreaking. … I will not vote against the nomination of someone who I am otherwise inclined to support and in the process add credence to charges which have already done permanent damage to his reputation, on the basis of allegations for which there is no independent corroboration and which are at odds with everything else we have heard about his character."

Despite Kavanaugh's tears and cries of innocence, he and Republicans initially refused to ask the White House to let FBI investigators look into the allegations, though GOP leadership has since changed its mind.

Scott, who's running for incumbent Democratic Sen. Bill Nelson's spot, also came to the same believe-both-contradicting-sides bullshit in his statement, saying he, unlike Nelson, would confirm Kavanaugh.

"I found Dr. Ford’s testimony convincing, and my heart goes out to her," Florida's GOP governor says. "I also found Judge Kavanaugh’s testimony convincing, and he’s correct that his character has been smeared. I think both these people have been used and abused as pawns in partisan Washington political theater. … I don’t know what happened 36 years ago in suburban Maryland. The truth is that none of us really know. So, I have to go with what I do know – Judge Kavanaugh has been a fair and brilliant Judge, one of our nation’s very best. He should be confirmed to the U.S. Supreme Court."

Rubio, Scott and other Republican representatives are essentially saying they can somehow both believe Ford's accusations that a drunken teenage Kavanaugh forcefully groped her on a bed, tried to rip her clothes off and held his hand over her mouth while laughing with a friend, and not find any of that disqualifying. (This little mental trick was nicely described by Sen. Ron Johnson, R-Wisconsin, who said, "I think most people listen to Professor Ford and think that she believes what she is saying"; italics our own.) They find Ford "convincing" and want to confirm Kavanaugh to the most prestigious court in the country because they don't actually give a fuck about sexual assault allegations – but they do care about who controls the Supreme Court for the next decades and gets to make the decisions about abortion, health care and gun laws.

Rubio even has the absolute gall to argue that "embarrassing behavior" at Thursday's Senate Judiciary Committee would encourage people not to report sexual assault.

"The ramifications of the rot we have witnessed will be felt far beyond the question before us now," Rubio says. "How many victims will now choose to remain silent? And who in their right mind would ever offer themselves up for public service if all that is required to have your reputation permanently destroyed is uncorroborated claims which are then spread far and wide?"

But the only person here encouraging victims to keep quiet about abuse and violence they experience is actually Rubio – who has shown us that ramifications and consequences don't really exist for those with privilege and power, no matter how "credible" the trauma. These women yelling at Sen. Jeff Flake say it best:

Women confront Sen. Jeff Flake after he says he'll vote yes to Kavanuagh: “That’s what you’re telling all women in America, that they don’t matter. They should just keep it to themselves because if they have told the truth you’re just going to help that man to power anyway.” pic.twitter.com/T7fSpyT69E