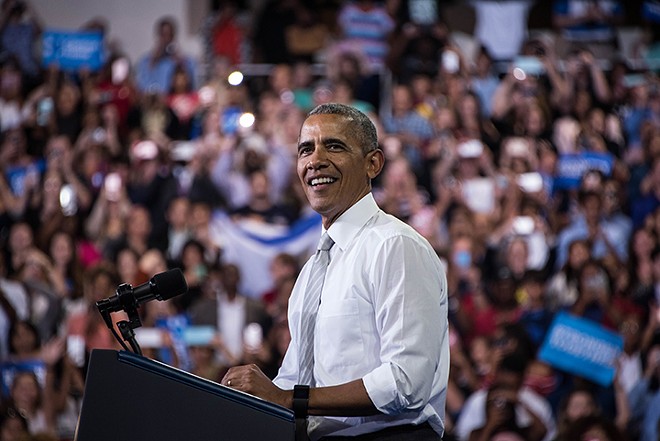 Tallahassee mayor and Democratic candidate for governor Andrew Gillum picked up the crème de la crème of endorsements Monday, from none other than former President Barack Obama himself.

Gillum is teeing off in November against Republican U.S. Rep. Ron DeSantis, who has coasted on the support of President Donald Trump since the 45th president endorsed the two-term congressman via Twitter.

"Andrew is a proven fighter with the courage and determination to stand up for Florida families," Obama says in a news release. "As governor, Andrew will expand access to affordable healthcare, protect Floridians with pre-existing conditions, invest in education, protect the environment and build an economy that works for all. Andrew believes that healthcare is a right, not a privilege, and he will make expanding Medicaid a priority on day one as governor."

Obama continues: "As Mayor of Tallahassee, Andrew developed a thriving innovation economy, grew workforce training programs and built safe communities where our children can thrive – a strong record for which I named Tallahassee a TechHire city. As governor, Andrew will fit to put the priorities of everyday people first."

In the release, Gillum noted his honor in receiving the 44th president's backing.

"He exemplifies true patriotism and characterizes the American values that both the country and Florid are striving to recapture," Gillum says. "As governor, we'll build on his legacy by making healthcare a right, not a privilege, investing in our children's education and protecting the environment for our future generation of Floridians."

Hillary Clinton, the Obama administration's former secretary of state, is also set to stump for Gillum in Florida later this month.