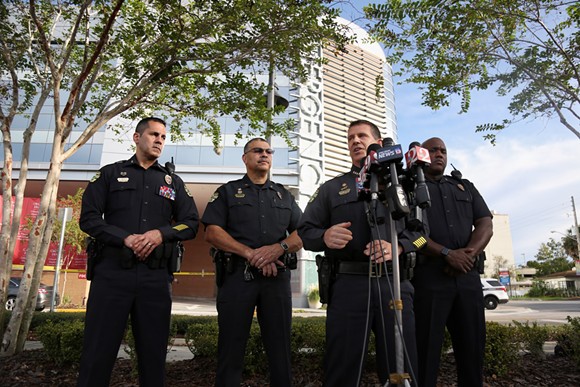 On Tuesday, the Orlando Police Department admitted that there was no body-camera footage from the three officers who shot a man making threats Monday in the emergency room at Orlando Regional Medical Center.

The suspect, 33-year-old Brian Baker, was unarmed and died on the scene.

"He made a motion that is consistent with pulling a firearm, and he was shot and killed by three officers," OPD chief John Mina said during a news conference following the incident.

According to a report from WFTV, one of the officers who shot Baker was a K-9 unit officer, meaning he wasn't issued a body camera. Another officer is a member of the SWAT team whose riot gear covered up his body camera. The third officer was wearing a body camera, but it ran out of battery and died following a 12-hour shift.

OPD upgraded its officers' body cameras to ones with a 10-hour battery life in June, following a similar failure of a body camera worn by an officer during a shooting at Colonial Plaza, though the officer whose body cam died prior to making it to the scene at ORMC Monday claimed his wasn't functioning by the time the 911 call was made.

"They should have never shot him. They didn't have to," Baker's father, Darren, told FOX 19 of Cincinnati. "There could've been three heroes that day, but instead there's three people that have a man's life they took for no reason. And that's kind of hard to accept."

On Monday morning, as law enforcement responded to staff who reported around 5:30 a.m. a white male patient in his 30s claiming to have a gun, the ORMC emergency room was placed on lockdown.

At the press conference following the incident, Mina told reporters Baker was transported from downtown Orlando to ORMC with a medical condition. Police said Baker appeared calm until he arrived at the hospital.

"He told hospital staff he had a gun, and that he would shoot anyone who came near him," Mina said of Baker. As law enforcement crisis negotiators began to talk to Baker, Mina said the patient made statements about how it was "going to end right here today" and also that he was a suspect in a homicide, though that has yet to be confirmed.

Mina told reporters that the decision was made to approach the suspect because other patients close by were in need of hospital care. When Baker was approached, that's when he moved and was shot.

No other injuries were reported on account of the gunfire.

According to OPD, Baker had in his possession a bus ticket showing that he was in Orlando on a layover while traveling from West Palm Beach to Kentucky.

The officers have been put on administrative leave following the incident. The Florida Department of Law Enforcement is investigating the shooting.

"Chief Mina feels strongly that officers follow the body worn camera policy," an OPD spokesperson said in a statement. "If policy violations are uncovered in this incident or any other, those will be investigated, and officers could face discipline."

The spokesperson added: "There were other officers with body worn cameras on the scene, and there is video of the shooting."