Iconic playgrounds in Mount Dora, Eustis, and Tavares are about to get major facelifts

With Wekiva Parkway construction well underway, the impact of the new Orlando metro beltway loop is starting to be felt in Lake County’s Golden Triangle area.

New housing developments are being proposed nearly every day in Tavares, Eustis and Mount Dora, and with new residents soon to flood these cities, the three historic areas are preparing for the rush by updating their family offerings.

Eustis recently wrapped up a multi-year update to their lakefront park that included the addition of a splash pad, artwork and refreshed landscaping to enhance views of Lake Eustis. Nearby, in the Sunset Island Park, the city is currently building a new $500,000 skate park. A Lake County Skateboard Invitational Competition is already in the works for the 9,000-square-foot facility, with more events likely to be announced in the coming months. There were plans for a major new Key West-inspired housing development on the private property that sits between the two parks, but those plans have since been canceled.

Over on Lake Dora, Tavares and Mount Dora are also looking to update their family offerings with both cities embarking on updates to their iconic playgrounds.

In Mount Dora, the fort-like playground in Gilbert Park was leveled late last month, as the city prepares to build a new $262,000 pirate ship-themed playground. The former play structure was a community project overseen by the Mount Dora Woman’s Club. However, after 27 years it was well beyond its expected lifespan and was quickly becoming a hazard. In a city report from earlier this year, issues included noncompliance with current ADA requirements and dated materials – such as railroad ties – that are no longer acceptable for playgrounds. The report also noted that the former play structure required extensive maintenance every three to four months with weekly inspections raising an ever-increasing amount of concerns, such as cracks, rusting, protruding nails and bolts, splintering wood and temperature of the metal slides.

Replacing the fort structure will be two themed play structures built by Danish playground manufacturer Kompan. The primary play structure will be a two-level, 60-foot-long pirate ship. It will house numerous play areas, two slides, ADA-compliant basket swings, rope climbs, plus numerous role-playing sections with faux-steering wheels, telescopes, and canons. The ship will be built from a mix of plastic and Robinia wood. 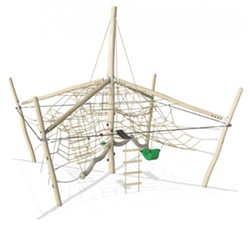 Next to the giant pirate ship will be a “Jungle Dome,” a modern jungle gym that encourages more physical play. The Jungle Dome will have multiple climbing apparatuses.

The nearby tots playground will remain mostly untouched since it is newer and has seen recent updates. The entire playground area will be fenced in and two fort-like entrances, paying homage to the original playground, will be constructed. The $263,000 update to the playground is being funded by the Mount Dora’s Parks Impact Fee.

On the other side of Lake Dora, Tavares is also looking at updating their aging playground. Their large playground structure is just a couple of years younger than Mount Dora’s and is now facing many of the same maintenance issues. Cost estimates are in the same ballpark as Mount Dora’s, with Tavares looking to incorporate the seaplane theme that the city has embraced in recent years.

The Wooton Park playground, known as Wooton Wonderland, isn’t in nearly as poor condition as the former Gilbert Park playground, so Tavares isn’t as hard-pressed for a quick solution. According to city employees, the new park is in the early stages still and may take a few years before its finalized. Currently, Wooton Park, including the splash pad next to the playground, is maintained by the City’s Community Services & Recreation parks division while the playground itself is overseen by another department due to the extensive amount of woodwork within it. That agreement may also be updated once the new park is built.

The skate park in Eustis and the new playground in Mount Dora should both open within the next few months with the updates to Wooton Park in Tavares being decided within roughly that same timeframe.