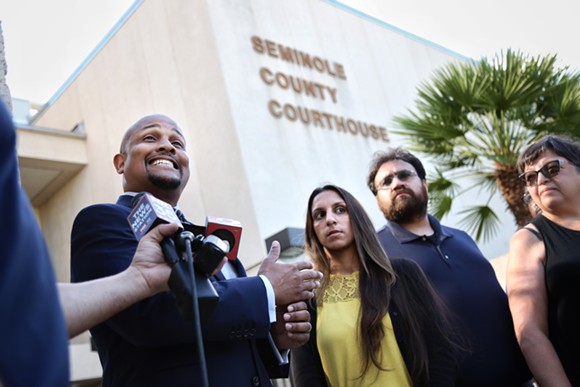 Advocates are renewing the call for Seminole County Tax Collector Joel Greenberg to resign in the wake of a discrimination lawsuit filed against him by a former employee.

Minaz Mukhi-Skees, a Muslim woman, accused Greenberg in a lawsuit of violating federal civil rights protections and the Family Medical Leave Act when he fired her from her position at the Seminole County Tax Collector's office three days after coming back from pregnancy leave. She also alleges Greenberg fired her and four other "minority employees" within months of taking office in January 2017.

"I filed this lawsuit because I want the citizens of Seminole County to know the discriminatory actions taken by the tax collector and the clerk of the court," Mukhi-Skees said at a press conference Tuesday in front of the Seminole County Civil Courthouse. "I believe that everyone in this country should have the same rights, regardless of gender, race or religion."

The lawsuit filed by Mukhi-Skees also cites the tax collector's history of Islamophobic social media posts, including a 2015 post where Greenberg  posted a cartoon of a woman wearing a full-length chador and niqab with a bulge on her back saying, "Does this bomb make my butt look big?"

Earlier this year, Greenberg came under heavy criticism by local Muslims and advocates after he posted an Islamophobic question on Facebook that said, "Very simple question...Name just ONE society in the developed world that has benefited in ANY WAY from the introduction of more Muslims. Just one. Asking for a friend." In a Facebook post following the 2017 bombings in Manchester, Greenberg said, "This is the reality of unchecked Muslim immigration."

"The timeline in this case screams discrimination," said Carlos Leach, an attorney representing Mukhi-Skees. "The injustice that happened to Ms. Minaz Mukhi-Skees is a threat to all of the Seminole County residents."

Both Greenberg's office and Seminole County Clerk of the Courts Grant Maloy, who is also named in the lawsuit, have refused to comment on the pending litigation.

Mukhi-Skees had worked under former Seminole County Tax Collector Ray Valdes starting in 2014, and during those years, she said she was praised for her work. After Greenberg took office in January 2017, Mukhi-Skees said her new boss was cordial but seemed preoccupied for the first few months in taking over the office and didn't speak much to her.

Later that year in April, she took approved maternity leave on April 12, and returned to work early on June 19. Three days later, Mukhi-Skees was fired without explanation from her position as a customer service representative and accounting clerk.

"I worked hard for three years, and I had a clean record as an employee with no reprimands or any write-ups," she said.

Mukhi-Skees was hired at the Seminole County Clerk of the Courts office shortly after her termination. She filed a discrimination complaint against Greenberg's office with the federal Equal Employment Opportunity Commission agency on Aug. 19. One business day after Greenberg's office received notice of the complaint on Sept. 15, Mukhi-Skees alleges she was fired from Maloy's office. She said she later learned from a coworker that Maloy had been instructed by the human resources department to terminate her employment.

"For the second time in two months, I was devastated," Mukhi-Skees said. "I was wrongfully terminated."

"Mr. Greenberg's comments aren't just here for discussion," he said. "They have lead to multiple terminations of people and this charge of discrimination. … Seminole County taxpayers are going to bear the full cost of this court proceeding. We stand here with the plaintiff to stand with her and to fight against the county, who will be defending Mr. Greenberg and his inexcusable actions."

Rasha Mubarak, president of the Young Democrats of Orange County, said she was proud of Mukhi-Skees for standing up not only for herself, but for other marginalized women of color.

"It takes courage, it takes bravery and it's not an easy task to take on," Mubarak said. "We stand with you Minaz, and we are proud for the courage you have embedded in so many people around you."

Mubarak said advocates were not surprised by Mukhi-Skees allegations because Greenberg has continued to make Islamophobic and xenophobic comments after the initial backlash. Mubarak added that Greenberg's publicist canceled a community meeting a couple months ago where the Seminole County tax collector was supposed to sit with Muslim leaders so they could educate him on what Islam truly means. They canceled the meeting because "there was no more media around and he had somewhere to hide," Mubarak said.

"We're completely waiting on our governor, Rick Scott, to call on his immediate resignation," she said. "We are here to stand against any kind of Islamophobia, xenophobia, that further marginalizes people of color, and marginalizes and creates a hazardous environment for so many people. Because this kind of rhetoric is violent among not just the Muslim community, misperceived Muslim community but people that are trying to make a living here in Seminole County. Our elected officials have a responsibility and duty to create safe climates and positive environments, not ones that stigmatize people and send a message of hate."