In a news release, Biden described Shaw as "a fighter, with a proven track record of standing up for the little guy."

Though former President Barack Obama didn't include Shaw among a string of Florida endorsements earlier this month, Biden's former ticket-mate gave the nod of approval to Democratic gubernatorial 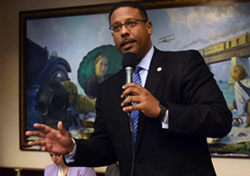 Shaw is facing off against Hillsborough Circuit Court Judge Ashley Moody, a Republican, in the Nov. 6 election. The winner will replace Attorney General Pam Bondi, who's term-limited.