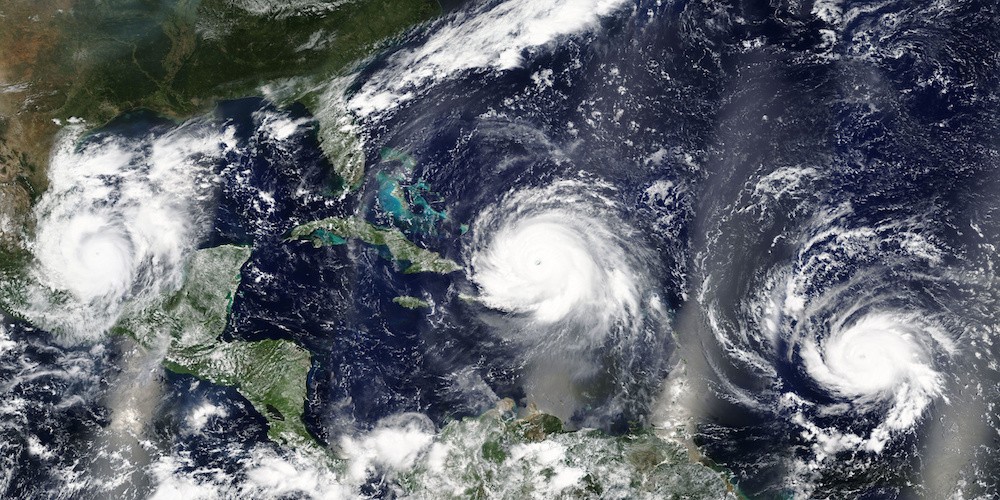 It's becoming more and more clear that Florida, Trump's favorite vacationing state, will probably get screwed over the hardest from our president's inability to act on, or even understand, climate change.

Three days before a near Category 5 Hurricane Michael obliterated Florida's Panhandle, a group of scientists with the International Panel on Climate Change released an incredibly damning report.

Essentially, the report says that if greenhouse gas emissions continue at their current rate, the atmosphere will warm by as much as 2.7 degrees, causing wildfires, rising sea levels, extreme weather and large-scale food shortages, as early as 2040.

However, in an interview on Sunday with CBS’ 60 Minutes, Trump waffled his way through questions about the report – actually walking back his often spouted claim that climate change is "a hoax," which is good – but not without adding a few unsupported nuggets like "I don't know that it's manmade" and "I’m not denying climate change, but it could very well go back."

Arguably the dumbest talking point to come from this interview was when Trump was asked about the scientists convened by the United Nations who argue hurricanes and other extreme weather events are getting worse. “You’d have to show me the scientists because they have a very big political agenda,” blurted the president.

Unfortunately, the issue of climate change has indeed become politicized. On one hand there's substantial evidence that 70 percent of the global emissions come from just 100 companies, which equals plenty of science-discrediting lobbying power. But there's zero evidence that the opposite exists – that somewhere there's a secret cartel of liberal scientists trying to screw over the United States with false climate reports.

"At its heart, this is just a wacky conspiracy theory," said Texas A&M climate scientist Andrew Dessler to the New York Times. "It’s important to realize that there’s never been a conspiracy by a huge field of science. And this would have to be an extremely massive conspiracy, considering the thousands of scientists working on this. On the other hand, there have been many examples (cigarettes, anyone?) where political advocates have tried to cast doubt on science that is extremely solid. That’s what’s going on here."

All of this is painfully ironic, especially when you consider that the economy is arguably Trump's favorite excuse for not acknowledging climate change, and yet the home of his "Winter White House," Florida, is expected to experience the largest economic impact from climate change.

A study published last year in Science Magazine stated that Florida will most likely suffer the biggest financial fallout, at $100.9 billion a year. The only other state that even comes close to a loss of this magnitude is Texas, which is estimated to lose $100.7 billion.

While Hurricane Michael's impact is still being tallied, last year Hurricane Irma alone met this expectation, with an estimated $100 billion in economic damages, according to Moody Analytics.

To pile it on, another report published in Nature last April stated that the absolute least amount of impact from climate change our planet can possibly hope for is our oceans only warming 2 degrees, which would raise overall sea levels by roughly 20 feet. If you need a visual, this would pretty much submerge Miami, Tampa and every other coastal city in the state.

Meanwhile, Trump refuses to understand that green energy will ultimately create more jobs and have a larger economic impact than fossil fuels, he's pulled out of the Paris Agreement, and he's rolled back fuel-efficiency requirements for automobiles.