The Orlando Police Department signed a new agreement with Amazon this week to test its controversial facial recognition software, marking the latest move to bolster the city's security network amid widespread civil liberties and privacy concerns.

The city will test the software, known as Rekognition, for a nine-month period starting Thursday using eight surveillance cameras deployed around the city — four at OPD's headquarters, three in downtown and one outside a community recreation center.

Orlando first piloted Rekognition earlier this year for a similar, six-month phase that ended in June, drawing widespread criticism from civil rights groups that said the technology could be used to racially profile civilians, monitor protestors or target minority communities. Orlando Police Chief John Mina has rebutted those concerns, saying once procured, Rekognition will only be used to help apprehend people who have arrest warrants.

In July, the city announced plans to enter into this second phase, but a formal contract hadn't been signed.

"A statement of work was finalized today to further evaluate Amazon’s facial recognition technology," city spokeswoman Cassandra Lafser said in an email Thursday afternoon. "The second phase pilot will include the same parameters and controls utilized in the first pilot," she said.

Rekognition can be used to automatically identify and track people of interest in the scope of the city's network of an estimated 180 IRIS security cameras. For the pilot, however, city officials say only eight will be utilized and it "will not be used in an investigative capacity," instead looking only for police officers who have agreed to serve as test subjects. 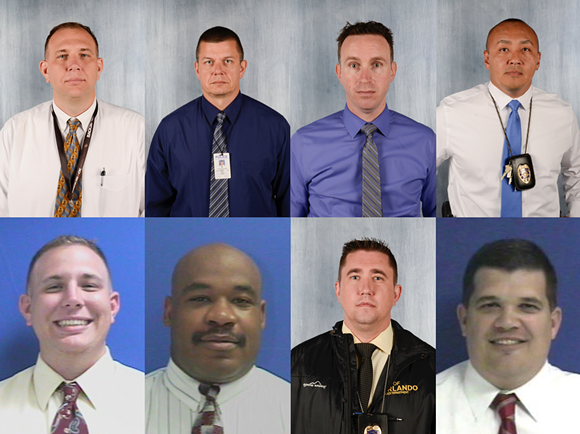 The partnership between Amazon and Orlando began in early 2017, when Rekognition was an unreleased product in Beta testing — an early trial stage for unreleased software. The Seattle-based company picked Orlando, the first city to test the software, for its ambitious Smart City initiatives and its record of technological innovation, according to emails between city officials and Amazon.

Orlando signed into its first pilot program shortly after the software hit the market in November 2017. During the six-month test period, OPD learned that its computers running Rekognition from the department's surveillance room weren't strong enough to use the face-scanning software with any more than eight cameras.

More extensive technology upgrades would be needed if Orlando were to use Rekognition to its intended potential: as a real-time facial tracking software analyzing dozens of video feeds at once, automating the otherwise monotonous task of having officers watch surveillance video themselves.

With the artificial intelligence-powered software, OPD wants officers to be able to upload a suspect's mugshot to Amazon's cloud-based data platform, where Rekognition will scan it along live surveillance feeds and send a mobile alert when it finds a match.

"If the technology works, [we] intend to use it for those worst-case scenarios, for the most violent people out there – your sexual predators, people who have committed heinous crimes, murder, and that sort of thing, and as well to locate missing persons and missing juveniles," Chief Mina told Orlando Weekly in August.

The city did not release any conclusive reports on how accurate Rekognition's facial matching capabilities performed during the first six-month pilot program. Lafser added that a set of policies and regulations for facial recognition technology won't be formed until after the second phase program.

"Following the pilot, if the City of Orlando Police Department decides to ultimately implement official use of the technology, City staff would explore procurement and develop a policy governing the technology," she said.

In Oregon, the Washington County Sheriff's Office is the only other law enforcement agency in the country openly using Amazon Rekognition, but not for real-time surveillance.

"Our own state laws and our own policies we've written prohibit us from such a use," Deputy Jeff Talbot, a WCSO spokesperson said in an interview with OW. "We don't think it should be used for mass surveillance. We feel like we've struck a great balance. We're honoring people's civil liberties here."

Talbot said his department uses Rekognition for after-the-fact cases. When officers have a clip of surveillance footage showing an unidentified suspect committing a crime, Rekognition can scan that footage with mugshots to find a match.

Amazon's facial recognition technology underscores the company's increasingly robust efforts to attract lofty government contracts — a direction of the retailer's billionaire CEO Jeff Bezos, who admitted during a conference this week that "you want people to have visions that most people won’t agree with."

At least 450 of his own employees disagree with his decision to sell Rekognition to law enforcement agencies and to subcontract firms working with Immigration and Customs Enforcement, according to an article published yesterday by an anonymous Amazon employee.

"Amazon is designing, marketing, and selling a system for dangerous mass surveillance right now. Amazon’s website brags of the system’s ability to store and search tens of millions of faces at a time," the letter read. "Orlando, Florida, is testing Rekognition with live video feeds from surveillance cameras around the city."