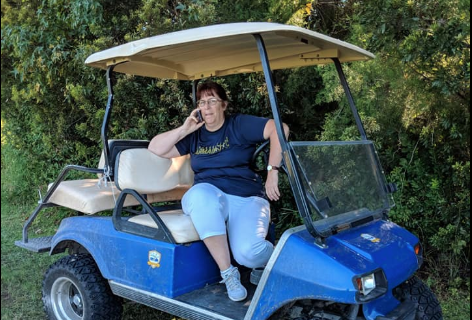 A white woman in Ponte Vedra earned the notorious nickname "Golfcart Gail" after she apparently felt so threatened by a black man enjoying his son's soccer game that she decided to call police on him.

First Coast News reports a witness named Ginger Galore Williams wrote on Facebook that she was at her son's soccer name when a field marshal called 911 regarding another parent who was cheering for his son during the game.

"This man was simply trying to watch his son's soccer game and cheer for him from the sides," Williams wrote on Facebook. "He yelled 'The ref is right!' when he saw his kid out there getting frustrated after a call."

Williams says that's when a woman she dubbed "Golfcart Gail" sprung into action and told the man harassment would not be tolerated toward the referee. Despite the father telling the field marshal he was only speaking to his son, the woman continued to "harass and beleaguer" the parent, Williams wrote. Shortly before the incident, Williams said a different parent had been ejected from the game but police weren't called during that situation.

"The gentleman offered to leave in order to avoid a situation," Williams said. "As he began to pack up his things Golfcart Gail informed him that she was calling the police because she no longer felt safe with his threatening behavior. This man was peacefully leaving his own son's soccer game to avoid exactly this situation."

In a recording of the 911 call obtained by First Coast News, the field marshal tells the operator, "I have parents that are out of control and need to be removed from a youth soccer game."

First Coast News also reports that another witness, Maria Morales-Walther, said the field marshal kept circling and agitating the black father and his wife. Morales-Walther, who was taping the incident, said the woman told St. Johns County Sheriff's Office deputies who arrived that she "feared for herself and the children because she didn't know what he [the father] was capable of."

Ultimately, deputies did not detain the man. First Coast News reports the president of the Ponte Vedra Athletic Association said the incident was "being mischaracterized on social media, and is more about parents behaving badly while watching their child play soccer."

"Golfcart Gail" is the latest in a series of incidents around the country involving white people calling authorities on black people for literally no reason, including a white woman in New York City who called falsely accused a 9-year-old black boy of sexually assaulting her when he brushed past her at a bodega.

"Shame on you Golfcart Gail for what you did to this man and to the children who had to see this," Williams wrote on Facebook. "Can you imagine how afraid his child must have been to see this happening?! Do you know how quickly in America a situation can go wrong? You probably don’t care Golfcart Gail, because you have the privilege of not caring. Thank you to the officers who did respond for listening to everyone and making sure the situation was dissolved safely. So long as this shit continues to happen, I will continue to speak out against it. Black Lives Matter. Don’t ask me again why I kneel."