Though Sheppard says he didn't produce the fake tweet, in the caption above Sheppard's screenshot of the fake tweet posted on his campaign Facebook page, the candidate writes, "Wow. Mina = Trump. Vote Sheppard for  Orange County Sheriff." 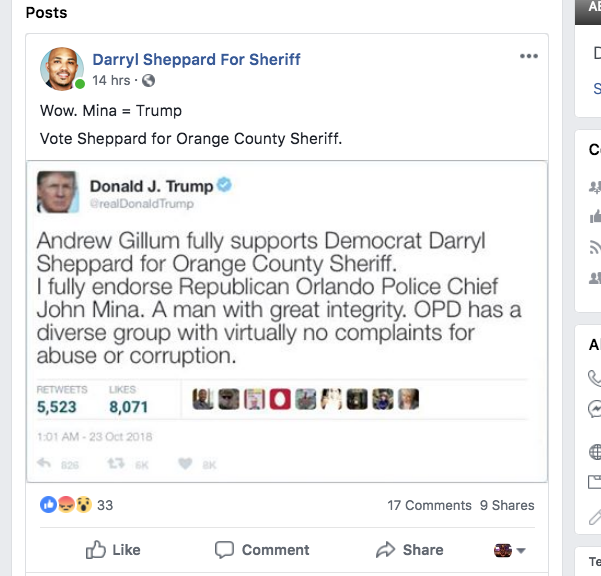 A quick dig through the president's tweets over the past 24 hours shows that the Trump social media endorsement is, in fact, a fake. Mina, of course, is the local favorite to win the county sheriff race. Former Florida Highway Patrol Chief Joe Lopez is also a candidate in the race.

Though the tweet refers to Mina as a Republican, the OPD chief changed his voter registration from the GOP Party to Democrat in September 2017. He is currently running for county sheriff as an independent.

When confronted with these facts, Sheppard tells Orlando Weekly, "John Mina began his campaign with lies and deception. He's a lifelong republican and only switched party affiliations to dupe the public. Trump and Mina are the same. Question for John Mina: did you ever suspect your big brother had pedophilic [sic] tendencies? If yes, please detail what you did to stop it. If no, how can we trust you to fight crime countywide if you can't spot this in your own older brother?"

Earlier this year, Mina's brother, Edward Mina, was accused and arrested on charges of molestation and sexual battery of a child. Following the arrest, Mina called the charges "extremely serious and disturbing."

"The fake tweet from President Donald Trump fabricated and shared by my opponent is a desperate and sad attempt to seek attention," Mina says in a statement. "Luckily, Orange County voters are smart enough to see through the political games."

"The content of the message is not inaccurate," Sheppard says. "I don't have the luxury of getting hundreds of thousands [of campaign dollars] from Disney, Universal, Sea World, Orlando Magic, virtually every trial attorney in Orlando...I could go on.."

He does go on, naturally.

"I have to take what I can get," Sheppard says. "And someone sent that in, it looked real, so I used it. And it's working. I appreciate the free media."

Welcome to the post-truth era. At least we know who's leading the way.