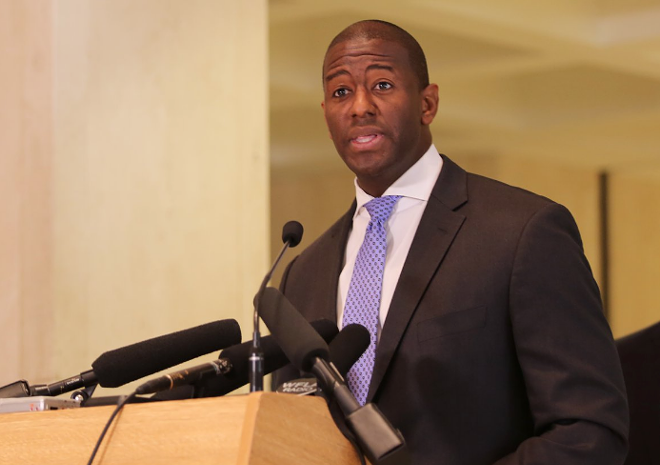 Democratic gubernatorial nominee Andrew Gillum's hotel expenses and a ticket to the Broadway show Hamilton were paid for by undercover FBI agents, according to an eyebrow-raising cache of newly released records.

The release of photos, a video and dozens of text messages between Gillum, close friend and former lobbyist Adam Corey, and an undercover agent  – which were originally obtained by the Tampa Bay Times – are the latest tidbits to come to light in the ongoing federal investigation into public corruption among city staff in Tallahassee, where Gillum is currently mayor. The records also seem to corroborate earlier accusations that allege Gillum  traveled for free with lobbyist friends to Costa Rica.

However, though the texts appear to contradict Gillum's earlier explanations of the 2016 expenses – Gillum claimed that his brother, Marcus, provided him with the ticket prior to the show – the candidate stands by his remarks about the alleged undercover set-up. Text messages at the time show the tickets came from "Mike Miller," an undercover agent who was posing as a real estate developer, per multiple reports.

"Awesome news about Hamilton," Gillum texted back, the records show.

Gillum addressed the allegations on FB Live: "These messages only confirm what we have said all along. We did go to see Hamilton. I did get my ticket to Hamilton from my brother. At the time, we believed that they were reserved by friends of Adam's, Mike Miller."

Gillum also noted: "And when I got there after work, got my ticket, we went in there and saw it, assumed my brother paid for it, and so far as I know, that was the deal."

No explanations have been provided as to how Marcus Gillum acquired tickets to the marquee Broadway show.

If the allegations prove to be true, Gillum never reported the gifts, which is required of elected officials under Florida law.

The Times reports that the records came from Chis Kise, an attorney representing Corey, who's at the center of the Tallahassee public corruption investigation. Kise reportedly said he gave the records to the Florida Commission on Ethics, which is investigating a complaint about Gillum's trip to the Big Apple and Central America.

According to the records, FBI agents put months of preparation into setting up an out-of-state meeting with Gillum.

In June 2016, Corey messaged "Miller" to tell him he would walk through various options with Gillum.

"I just want to make it a good trip and Sweets and B" – the two other undercover FBI agents – "will be booked on something else if we don't lock something down," Miller replied.

At a later point, Corey proposed a Las Vegas meeting.

"AG [Andrew Gillum] thinks Vegas in August is an easier option for him," Corey messaged Miller. "He is double checking availability with his office now. Stand by."

As it would turn out, the group would later meet in New York City, where Gillum was attending a conference on behalf of the liberal advocacy group People for the American Way Foundation, which employed him.

According to the texts, Miller paid for Marcus Gillum's airfare and hotel.

"Send me the mayor and his brother's information and I will have my girl book their flights," Miller messaged Corey, who then replied that Gillum had already covered his own airfare.

"Just tell them to let me know what their flights costs and I will cover it," Miller messaged Corey.

In June, the ethics complaint against Gillum was filed. Following the Aug. 28 primary, in which Gillum rocketed to a come-from-behind win, Gillum met with investigators in early September.

After the release of Tuesday's revelations into the ethics investigation, U.S. Rep. Ron DeSantis, the GOP nominee for governor, seized on the opportunity to rake Gillum over the coals.

"This is what corruption looks like," DeSantis said during an appearance on Fox News Tuesday night.

No one has been charged in the investigation so far. Gillum has previously claimed that the FBI assured him that he wasn't a focus of the probe.

So will the latest document dump be enough to sink the historical candidate's ship – Gillum is the first African American nominee for Florida governor – with roughly two weeks to go before the Nov. 6 election?

As the Times notes earlier today, Florida's voting population has been relatively immune to candidate corruption in the past – an example: Rick Scott, a twice-elected former hospital CEO who led a company that financed the largest Medicare fraud in U.S. history, and who then used some of his gained capital to fund his campaigns for governor and the U.S. Senate.

On Tuesday, a poll from Florida Atlantic University showed that likely Florida voters favor Gillum 41 percent to DeSantis' 37 percent. Meanwhile, 18 percent of those included in the survey remain undecided in the race.