This morning, the U.S. Department of Justice arrested Cesar Sayoc Jr., a 56-year-old with an Aventura address, in connection to the series of homemade explosive devices sent to prominent Democrats and critics of President Donald Trump.

Sayoc, who was a registered Republican, maintained a wide range of disturbing social media accounts that often centered on right-wing conspiracy theories, racist, anti-Semitic and transphobic memes, as well as graphic threats to prominent Trump critics.

Sayoc had at least two Twitter handles, one titled @hardrockintlent and another titled @hardrock2016. Both were used to post videos and photos of himself at Trump rallies, including at least one from 2016, and to also send graphic threats to celebrities, Democrats (including Florida gubernatorial candidate Andrew Gillum), and critics of Trump.


He would often send the same series of images of a man being eaten by a snake, and another of a decapitated goat, to Twitter accounts like CNN, Joe Biden, Ron Howard, Jeff Flake, Jim Carrey and more.


His Linkedin profile says that he worked as a promoter and booking agent as well as a Human Resources Manager at Seminole Hard Rock Hotel & Casino in Hollywood, though a representative with the company told Orlando Weekly that they have no record of his employment. 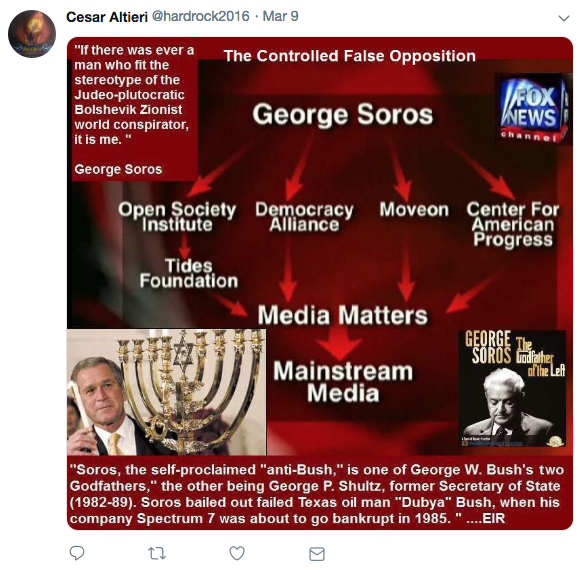 Sayoc's LinkedIn profile stated that he graduated from Brevard College in North Carolina and University of North Carolina at Charlotte, but OW has not confirmed his enrollment at either school.

Sayoc also had at least two Facebook accounts: a personal one that used a different last name, "Altieri," and another that appears to be used for a promotional business called "International Gold Productions," which looks like an imitation of Chippendales. A spokesperson for Chippendales said Sayoc has never been affiliated with the company, and in fact, Chippendales has sued "Gold Productions" multiple times.

"Cesar Altieri or Cesar Sayoc, was, and has never been affiliated in any way with Chippendales USA, LLC," spokesperson Michael Caprio said in a statement. "Chippendales is in no way affiliated with Gold Productions and have taken extensive legal action against them to prevent them passing themselves off as being affiliated with our organization."

Political commentator Rochelle Richie says she reported Sayoc to Twitter earlier this month for sending her threats after she appeared on Fox News. She says Twitter did not suspend his account because the posts did not violate their rules for abusive behavior.

Hey @Twitter remember when I reported the guy who was making threats towards me after my appearance on @FoxNews and you guys sent back a bs response about how you didn’t find it that serious. Well guess what it’s the guy who has been sending #bombs to high profile politicians!!!! pic.twitter.com/xBY8FMbqnq


This morning officials confirmed that Sayoc has ties in New York. Court records in Broward and Miami-Dade Counties indicate his birth place as Brooklyn, New York. Sayoc had a long history of arrests in both counties, mainly for petty and grand theft, plus traffic charges. In 2002, Sayoc was arrested in Miami-Dade for a threat to bomb or throw an explosive device.

ABC News reports Sayoc's former lawyer said Sayoc threatened to throw a bomb at a Florida utility representative when he got frustrated by the service. Miami attorney Ronald Lowy said Sayoc "showed no ability at the time to back up his threat with bomb-making expertise," and he served a year's probation.

A fingerprint on an explosive device led authorities to Sayoc, who was arrested at around 10 a.m. this morning at an AutoZone in Plantation, Florida at 801 S. State Road 7.

Sayoc's van was also taken into custody. A Twitter user who said they saw the van at a stoplight back in April posted photos showing the vehicle covered in a variety of right-wing political bumper stickers, including decals advocating for the Republican Party; rifle scope images over the faces of Hillary Clinton, former President Barack Obama, and filmmaker Michael Moore; and another sticker showing a massive portrait of President Donald Trump on the left side window. Another sticker said, "CNN Sucks."

No one has been physically injured by the explosive devices, which are being considered an act of domestic terrorism.

Speaking at a press conference this afternoon, FBI Director Chris Wray told reporters that the bombs "are not hoax devices." So far, the agency says that 13 improvised explosive devices were sent across the country, all containing "energetic material." Wray also stated that there could be more IEDs that are currently not accounted for.