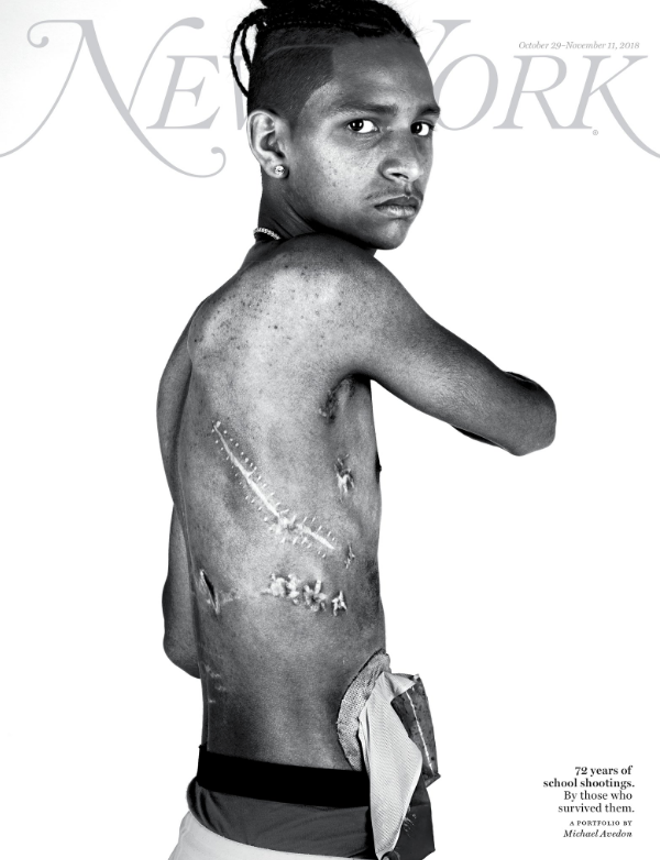 In the latest issue of New York Magazine, six survivors of the Feb. 14 mass shooting at Marjory Stoneman Douglas High School are featured as part of a look into a half-century of school shootings in the U.S.

With his scars and colostomy bag exposed, the magazine's cover depicts a black-and-white photo of 15-year-old Anthony Borges, a Douglas High student who was shot five times during the incident, which left 17 dead and 17 more injured. Though he nearly lost his life in the process, Borges is credited with protecting the lives of 20 classmates during the shooting.

Other Parkland students featured in the story include Samantha Fuentes, Ashley Baez, Isabel Chequer, William Olson and Alexander Dworet, whose older brother, Nicholas, was among those killed in the shooting.


There have been more mass school-shooting deaths in the past 18 years than in all of the 20th century. The long list of casualties includes a classroom full of first-graders, an event that shocked the nation — but not enough. Deadlier weapons have become more available, bullets can be ordered online.

So why don’t we talk about this all the time? Partly because it scares us. And partly because the problem can seem so intractable, even as polls show majority support for measures that could curb the violence.

In the midst of this amnesia, we wanted to conduct an exercise in remembrance, seeking out the survivors of school ­shootings from as far back as we could find them. What, we wondered, could their memories teach us about our inattention? The people whose bodies — in many cases — won’t let them forget.