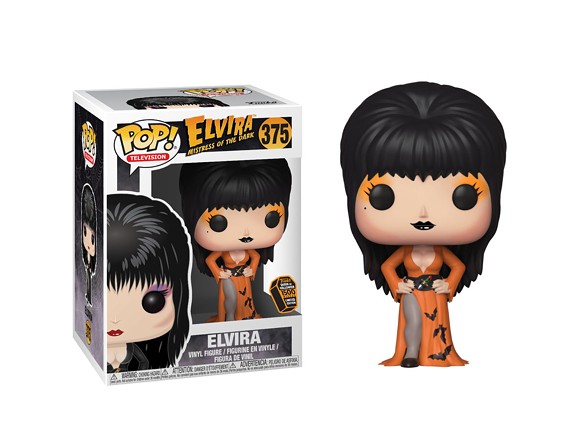 In case you didn't hear, there was a whole thing over at the Spooky Empire horror convention this weekend.

A limited-edition Elvira Funko Pop, exclusive to the horror and pop-culture convention, caused fights to break out between actual, real-life adults when the plastic figurines didn't arrive on time Friday night.

The cops were called in. Arrests were allegedly made. A whole thing.

Well, Cassandra Peterson, aka Elvira, made a statement over the weekend blaming "resellers and scammers" for the problems with the line, and urges fans to boycott the purchase of resold figures on eBay and other sites. 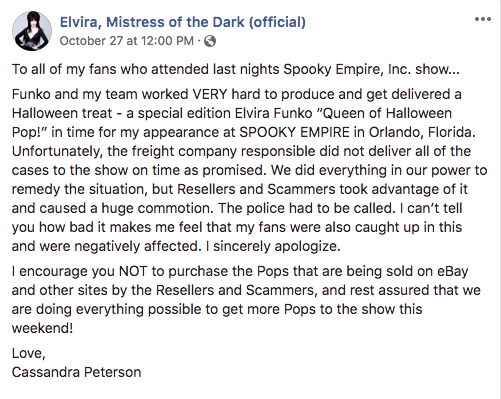 Spooky Empire, who are getting plenty of blame for the situation in the internet's nerdier circles, responded with the following statement to Orlando Weekly:


Like all major events, we have experienced growth pains. We want our old and new fans to know, your happiness and safety is our number one concern. Through a series of challenges, not in Spooky Empire’s control, we were sad to see what transpired with the Funko Pop dolls, which our celebrity guest intended to be a fun opportunity for fans. We’ve learned from what transpired and plan to use that knowledge to bring attendees an even more ultimate and satisfying experience. We are growing bigger and better every year, so we’re excited to have everyone back in 2019! – Pete Mongelli, Co-Founder of Spooky Empire