Tampa and St. Pete once again have ferry service, but both cities take a gamble with different hours and new locations

In late 2016, Tampa Bay’s two largest cities launched a pilot program connecting the waterfronts of Tampa and Saint Petersburg via a passenger ferry, the Cross-Bay Ferry.

By the end of the six-month pilot, the program served more than 40,000 passengers. Now, thanks to a new funding partnership between Pinellas County, Hillsborough County, the City of Tampa, and the City of St. Pete, the ferry is returning for another six-month run.

A special inaugural cruise will take place on Halloween, then regular service will begin Thursday, Nov. 1.

One of the biggest lessons learned from previous years regards the location of Tampa’s terminal. Previously, it was at the Tampa Convention Center, but construction at the convention center forced the ferry to instead use a berth near the Florida Aquarium. The updated Tampa location means the ferry service can now run during special events, such as Gasparilla and New Year's Eve. The former site was too close to where many of the events occur, so the ferry was unable to access its berth.

St. Pete also has a new location. The pier near where the ferry previously docked is in the midst of a multi-year rebuild and upgrade, so the boat now docks at the Vinoy Marina just north of the pier.

HMS Ferries, which operates the Cross-Bay Ferry, is the largest private operator of high-speed passenger/vehicle ferries in the nation. Some of their other notable operations include the Governors Island Ferry in New York, the St. John’s River Ferry in Jacksonville, the Riverlink Ferry in Philadelphia, and the Pierce County Ferry in Washington State. 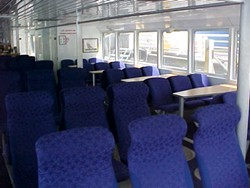 The Tampa Bay seasonal ferry service covers the winter months, when St. Pete sees a substantial snowbird population as well as an increase in visitors to the city’s cultural institutions. It also provides a transportation alternative to those attending Tampa Lightning games. The ferry is slated to run through April 30, 2019, roughly three weeks after the regular NHL seasons . On nights that there are Lightning games, the ferry will operate on extended hours.

The early morning shuttle service won’t be returning this year, despite popularity. Most of those trips occurred during the weekends, though, so this year the Friday and Saturday schedule includes more trips.

There will be no service on Mondays.

Also new this year are cheaper tickets: Adult rides now cost $8 one-way. There are discounts for seniors, active/retired military and college students on tickets. Advance tickets for the ferry shuttle service are on sale now.