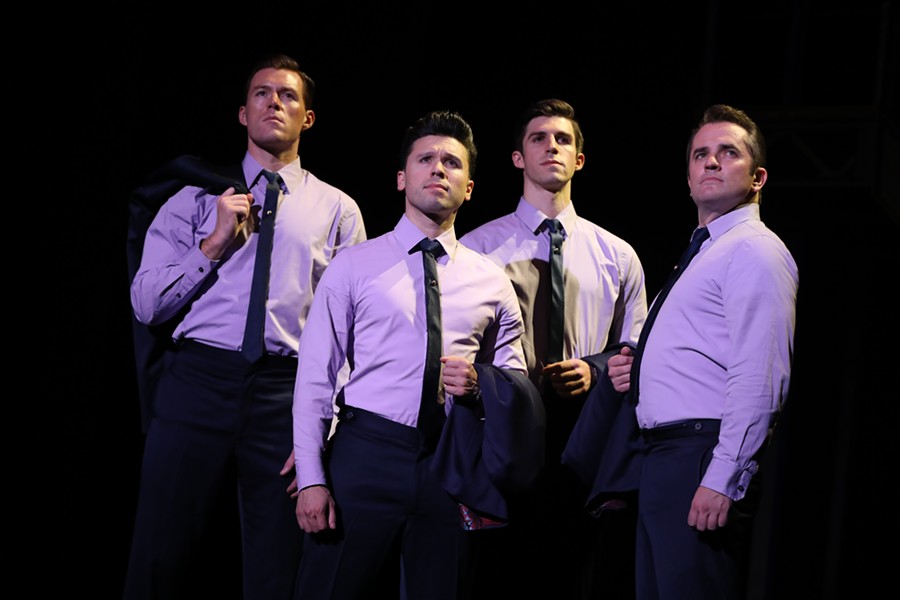 If familiarity breeds contempt, than I should be rushing to consign Jersey Boys: The Story of Frankie Valli and the Four Seasons to a Meadowlands landfill for revisiting Orlando only four years after its last local appearance, and less than a decade since its first. Instead, the Equity tour of this Tony-winning tribute to my home state’s favorite sons again reminds us how good the much-maligned jukebox musical genre can be, when classic songs are supported by seamless direction.

Refer to my 2014 review if you require a recap of the storyline (scripted by Addams Family scribes Marshall Brickman and Rick Elice), which is somewhat sanitized retelling of the pop quartet’s real-life rise to fame. The Rashomon-style structure, which gives each founding member an act to tell their version of the story, is a clever way of sidestepping arguments about historical accuracy, and the songs – by Bob Gaudio and Bob Crewe, plus a host of other Brill Building-era composers – are largely integrated diegetically in a concert context, instead of straining to align pre-existing lyrics with the plot. As a result, the hit parade soundtrack is allowed to take center stage, supported but a surprisingly emotional (though not overly sentimental) throughline about loyalty and loss.

After multiple viewings, I appreciate the subtle shadings that different actors – all ostensibly incarnating the same actual people – have brought to their roles over the years. As Frankie Valli, Jonny Wexler has the requisite heavenly head voice, but also a youthful arrogance that dissolves into self-doubt during the show’s darker moments. Eric Chambliss’ good-natured Bob Gaudio has a gift for glib understatement, and Jonathan Cable smartly underplays the underrated Nick Massi until his marvelous aria-like meltdown. Corey Greenan’s heavy-handed Joisey-isms make Tommy DeVito seem like a Sopranos extra, but earned him the most enthusiastic audience reactions, so whadda I know?

Of course, repeated visits also reveal flaws, particularly how grating the opening five minutes of French rap are, and how thinly written all the female characters are – Ashley Bruce does her best to give Valli’s wife, Mary Delgado, some depth, but she has only a handful of lines to work with. Orlando’s opening night was especially rough from a technical standpoint; it started a quarter-hour late, the sound was muffled with many muted microphones, and the lights and videos screens distracted with mismatched colors and flickering pixels.

It’s a testament to Jersey Boys’ fundamental soundness that none of those aforementioned nitpicks ultimately matter once this show is in motion. Sergio Trujillo’s choreography, which had gotten sloppy during the previous production, is again as sharp as a freshly pressed three-piece suit. And Des McAnuff’s direction remains my benchmark for perfectly paced transitions, with every scene dovetailing dance-like into the next. From the iconic first act finale that places the audience on stage behind the band to the four actors’ exuberant arm-in-arm exit after the standing-O encore, Jersey Boys remains a must-see corrective for anyone who thinks the jukebox musical has killed Broadway. I only hope the people behind Cher’s upcoming show have also seen it once or thrice.