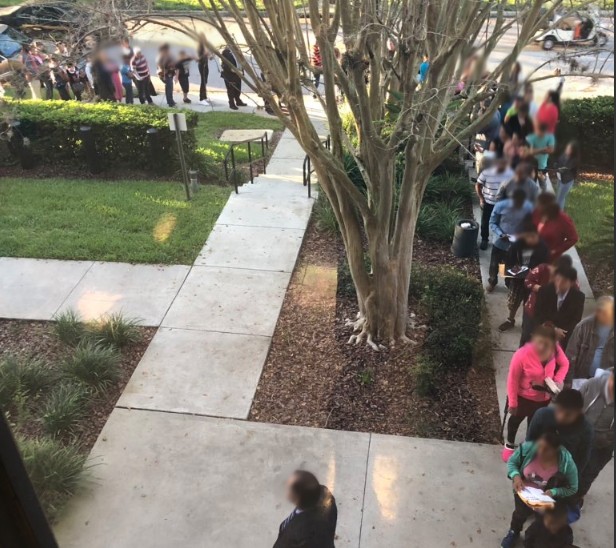 People standing in line were told they were supposed to be at the courthouse off Maguire Boulevard on Oct. 31 for a hearing on their case, but for many, that hearing was never scheduled on the docket, says John Gihon, an immigration attorney with the firm Shorstein, Lasnetski, & Gihon.

"At the peak, the line was coming out of the door, down the sidewalk, down the right and well into the parking lot," Gihon says. "Inside there was a ton of people waiting to ask about their court dates. All of them were given fake court dates for Halloween morning at 9 a.m."

Gihon explains that ICE and other agencies within the U.S. Department of Homeland Security are scheduling "fake dates" in order to comply with a recent ruling from the U.S. Supreme Court regarding notices to appear, also known as NTAs.

Once the removal process is started, undocumented immigrants have to appear in court where they can argue their case before a judge – and not showing up to this hearing can lead to a quick deportation.

Before the Supreme Court ruling, DHS agencies would issue NTAs to undocumented immigrants without a court date.

"Some immigration agency would tell you, 'We want to deport you. Here's a notice to appear that tells you why we want to deport you, but we didn't give you a date or time to appear,'" Gihon says. "The Supreme Court said they can't do that anymore. You can't give a notice without telling them when they're supposed to appear."

In the case Pereira v. Sessions, Wescley Fonseca Pereira came to the U.S. from Brazil in 2000 and overstayed his visa. After he was arrested for operating a vehicle under the influence of alcohol in 2006, Pereira received an NTA from immigration officials charging him with overstaying his visa. The NTA, though, did not have the date and time of Pereira's removal hearing.

A year later, DHS coordinated a specific time and date with the immigration court for Pereira's hearing, they sent it to the wrong address and Pereira never received the notice, which led him to miss the hearing.

In 2013, Pereira was arrested for a minor traffic infraction and detained by DHS. At his removal proceedings, though, Pereira argued that because his initial NTA didn't have a time or date, it didn't trigger the "stop-time rule," which states undocumented people stop accruing "continuous presence" after they're served with an NTA starting removal proceedings. People who accrue 10 years of continuous physical presence in the U.S. are eligible for a form of relief known as cancellation of removal, which basically suspends their deportation.

In June, the Supreme Court ruled 8-1 agreeing with Pereira's argument.

"If the Government serves a noncitizen with a document that is labeled 'notice to appear,' but the document fails to specify either the time
or place of the removal proceedings, does it trigger the stop-time rule?," Justice Sonia Sotomayor wrote for the majority. "The answer is as obvious as it seems: No."

And now, because of that Supreme Court ruling, attorneys say DHS is issuing "fake dates" to comply with the ruling before coordinating with immigration courts. Lawyers around the country have reported their clients issued notices to appear in court at midnight or on non-existent dates like Sept. 31.

In a statement, a spokesperson for ICE said the agency "puts initial dates and times on Notices to Appear based on guidance on upcoming docket dates," but that local immigration courts are ultimately responsible for re-scheduling those NTA to dates that are appropriate.

"[The Executive Office for Immigration Review] is responsible for setting and re-setting appearances dates upon receipt of Notices to Appear filed by U.S. Immigration and Customs Enforcements and other components of the U.S. Department of Homeland Security," ICE spokesperson Nestor Yglesias said in a statement.

Gihon says he checks the court's docket system to see if his clients have hearing before going to immigration court, but others aren't so lucky and showed up to wait in line, fearful of being deported for missing a hearing.

"I think it adds to the fear and confusion," Gihon says. "They're already petrified of being detained and deported, so when they show up and there's no court date, it just makes it worse. They think they've been tricked or duped, that ICE is somehow trying to hoodwink them into being deported."

Henry Lim, an Orlando immigration attorney, calls the practice a "colossal waste of time and stress."

"This falls squarely on the shoulders of ICE and the whole immigration system," Lim says. "The courts are overburdened and under sourced, nevertheless ICE is tasked with scheduling people correctly. There are 700,000 pending deportation cases and they don't want to add resources to hire immigration judges. Combine that with the administration going after every single person who's undocumented, including grandmothers and non-violent offenders. A lot of these inefficiencies are self-caused."

UPDATE: In a joint statement, the U.S. Department of Homeland Security and the Department of Justice say they are "working through minor logistical errors that resulted in a number of individuals appearing for immigration court hearings that were not docketed in accordance with regulatory requirements."

"These errors will be resolved and will not prevent these cases from being docketed properly in a timely fashion," the agencies said.