Red Claw, the now-shuttered downtown Orlando lobster roll spot you never tried but should have, no longer exists. But at least their website is still serving hot takes.

The establishment closed last month – and while their short-lived but celebrated lobster rolls are no more, the restaurant's website has since been edited to the point where all gloves have been removed, all dishes are spicy, and if you never sampled their menu, you will undoubtedly feel bad.

"The taste you'll never have. You could have, but you didn't," reads the menu section, which has been completely rewritten and is now filled with grievances and slights toward customers and the restaurant itself.

Some of the highlights include "Drunken Mussels: The mussels weren't as drunk as most of our patrons," "Lobster Nachos: Lobster on chips is gross" and "Tom Brady Is a Cheater: Seriously, the Patriots Suck."

The pie descriptions in the pizza section have also been edited. "I'm a vegetarian. Go PETA! But I don't like vegetables," reads the text for "Veg With a Kick."

In the section that used to display Red Claw's happy hour information, it now reads "No hours will ever be happy, here." Where events used to be listed, it now says "Events: You missed them. They were lame anyways." 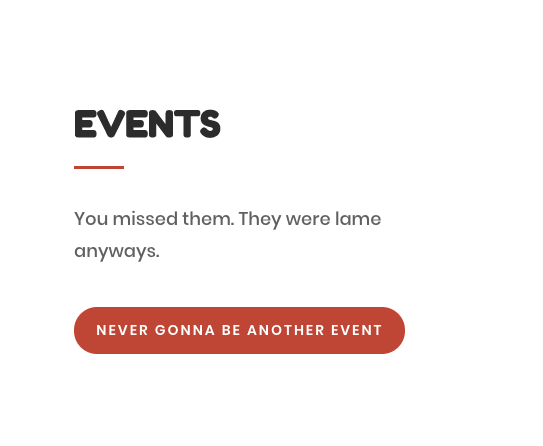 If you're looking for Red Claw's address (it was inside Orange County Brewers at 131 N. Orange Ave.), the site simply says, "Corner of closed and don't give AF." Another part reads, "We are permanently closed. In a way that lasts or remains unchanged indefinitely; for all time."

The site is certainly funny, sad, frustrating, and every other emotion that comes paired with a restaurant closing. If anything the site is best served as a warning shot to Orlando foodies: If you like something, actually go, tell your friends, and support locals!

An outpost of Pizza Bruno has since opened in Red Claw's former spot. So, maybe give them a shot before another one of these sites appears.