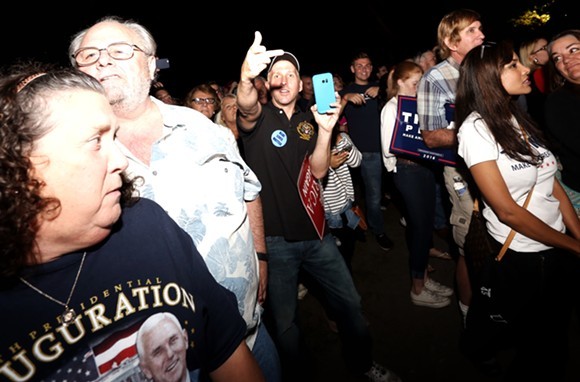 For dozens of people attending a political rally Wednesday in Southwest Florida, another celebrity held almost as much fascination as President Donald Trump, the headliner of the event.

A steady stream of rally-goers, many of them wearing “Make America Great Again” red caps, drifted by the fenced-off space for the media in the center of Hertz Arena to heckle CNN’s Jim Acosta, often before or after asking the White House correspondent to pose for selfies.

Acosta’s allure continued throughout the wait for Trump to appear. But even as chants of “CNN Sucks!” rippled through the venue, the cable-news star smiled, waved and appeared to take it all in stride.

Gary Cullen was among the pumped-up Trump supporters who took time out to castigate Acosta from the other side of the media barricade.

Clad in a black T-shirt with a graphic of a boy urinating on “CNN,” the 36-year-old Cape Coral resident told the News Service of Florida that “respect” is what’s lacking in American political discourse today.

“That’s what we’re missing in this country,” Cullen said, without a hint of irony.

Trump was in Florida to stump for Republican Gov. Rick Scott, who’s trying to unseat U.S. Sen. Bill Nelson, and GOP gubernatorial candidate Ron DeSantis, who’s facing off against Tallahassee Mayor Andrew Gillum in one of most closely watched races in the nation.

Joining Trump onstage, DeSantis railed against Gillum, who has been under scrutiny for accepting a ticket to the Broadway hit Hamilton, and for expenses related to a Costa Rica trip. Both excursions are linked to an undercover FBI agent, “Mike Miller,” who was posing as a developer trying to do business with the city of Tallahassee.

In what has become a cornerstone of his campaign, DeSantis blasted Gillum for the FBI investigation focused on the mayor’s city and mocked the Democrat for saying at one time that he wanted to impeach Trump.

“This is a guy that took bribes from an undercover FBI agent. … Maybe we should impeach Gillum as mayor of Tallahassee!” DeSantis said, sparking the audience to erupt with “Lock him up!” The chant echoed the refrain hurled at Hillary Clinton during Trump’s campaign two years ago.

Gillum, while making the rounds on national cable news, decried DeSantis’ tone, which he says mirrors that of Trump.

“From day one, he’s gone completely to the gutter on this campaign,” Gillum said Thursday on MSNBC’s Morning Joe.

When asked if there was anything he regrets in his campaign, Gillum was unequivocal.

“Not at all. I think we’ve run a campaign that should be modeled,” the Democrat said, adding that he’s offered “concrete proposals” when asked about his policies.

But, Gillum, seeking to become the state’s first black governor, added, “I also haven’t taken any punches from my opponent,” especially when it comes to race-related issues.

“We called him out on it. And I honestly think we need to do more of that,” he said.

“I love Donald Trump and everything that he stands for, does. I wish he could be king.” Debbie Robinson, a 63-year-old Jupiter woman who traveled to Estero for Trump’s rally. tweet this

James Fahnestock stood in the blazing sun for more than five hours Wednesday while awaiting his first opportunity to see his hero, Trump, live and in person.

Fahnestock’s red MAGA cap did little to protect him from the heat, but the sweltering temperatures didn’t dampen the 36-year-old Naples resident’s enthusiasm for the man who’s not on the ballot in Florida but who, indirectly, is at the top of the ticket.

“I wish I could take a bullet for him,” Fahnestock told the News Service before entering Hertz Arena along with other Trump fans who traveled from throughout the state.

“He’s the greatest thing that’s happened for America in a long time,” Fahnestock, who sells real estate, said of the president.

For Fahnestock and more than 8,000 other fans Wednesday night, Trump delivered, as he urged Floridians to throw their support behind DeSantis and Scott.

The Nov. 6 election is “one of the most important … in our entire lives, although, I will say, not as important as 2016,” he joked.

The president boasted of a litany of successes, including lowering taxes, fighting illegal immigration and taking “unprecedented action” against terrorist regimes, such as Iran.

But, pointing to the fenced-off area in the center of the arena, Trump blamed the press for failing to properly convey his achievements to the public.

“The media doesn’t want you to hear your story. It’s not my story. It’s your story,” he said, eliciting loud boos from an audience clad almost exclusively in red, white and blue.

Trump’s appearance Wednesday in Estero and another planned rally Saturday in Pensacola are part of a last-minute push by the president as he visits Republican strongholds to boost enthusiasm for GOP candidates.

Earlier in the week, hundreds of supporters — including a Chihuahua festooned in red, white and blue — gathered in the parking lot of a popular wing joint in the Democratic stronghold of Broward County to cheer on DeSantis.

Andrew Pollack, whose daughter, Meadow, was among the 17 victims slain on Feb. 14 at Marjory Stoneman Douglas High School in Parkland, had already whipped the crowd into a near-frenzy by the time the 40-year-old former congressman took the stage.

“We got any patriotic, America-loving Republicans here?” Pollack shouted, as he tossed out “Keep Florida Great Vote DeSantis” caps. The blue hats were also emblazoned with “Wings Plus,” the name of the restaurant hosting the rally and a popular venue for GOP political events.

Accompanied by his wife, Casey, and two young children on stage, DeSantis quickly attacked Gillum, focusing on the FBI inquiry.

The DeSantis strategy of linking crime and corruption with the Tallahassee mayor resonated with Judi Bougie, a 71-year-old Coral Springs Republican who was familiar with the attacks on the Democrat even before Sunday’s rally.

Awaiting DeSantis’ arrival at the event, Bougie told the News Service of Florida she looks at “the pros and the cons” of each of the candidates.

“I don’t like what he’s not done for Tallahassee,” she said. “There’s a lot of crime up there.”

But at an early voting site in Tamarac, Weston Wynton, who moved to South Florida from Jamaica 15 years ago, said he rejected DeSantis because of his ties to Trump and because of the Republicans’ shared anti-immigration stances.

“I don’t support Trump and his corrupted, small-minded way of looking at immigration,” Wynton, 55, said.

Gillum “is smart, intelligent and has an agenda that will benefit the people,” according to Wynton.

“That is why I voted for Andrew Gillum. Not because he is black,” he said.