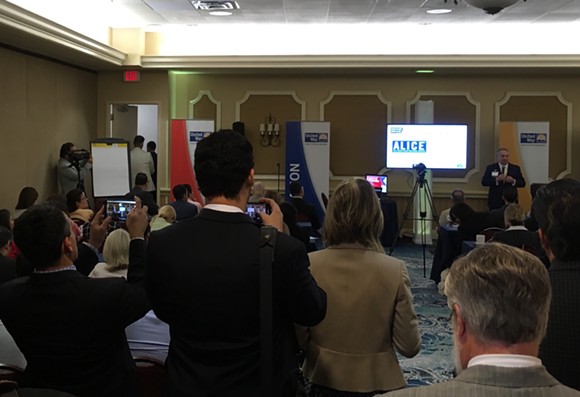 The flood of people leaving Puerto Rico may have exceeded 200,000 by the end of this year, a new report from the United Way says.

And that means the region needs to keep thinking and planning ahead for their needs. A significant portion of those people have relocated to the Orlando area.

“This was a crisis but challenges will keep coming,” said Ray Larsen, executive director at Heart of Florida United Way, at an event Friday held by the Hispanic Chamber of Commerce of Metro Orlando.

The report, authored by UCF researchers, has yet to be issued in final form, but key takeaways were presented at the chamber’s economic summit.

Despite initial resistance, said Delitza Fernandez, project coordinator for United Way, they set up the evacuee center at Orlando International Airport and “it became my office for 6 months, 7 a.m. to 7 p.m., seven days a week at the beginning.”

United Way and others at the evacuation center at the airport soon turned their attention toward housing, and then teamed up with IKEA to help provide basic furniture to those who fled with little or nothing but a few bags of clothing.

Larsen said that when evacuees arrived, “They started to weep. They would take a picture of the welcome center.”

Trying to help those still on the island was also a struggle at first. Sending heavy loads of water proved challenging, so Jeff Hayward, HFUW CEO and president, said they turned to sending water filters. The same was true for batteries and lights, because shipments might not arrive in the same place at once, so solar-powered light cubes were sent, along with solar panel phone chargers.

When those needs were finally identified, Disney quickly wrote a check for $250,000 to aid the effort, Hayward said.

He said they soon learned that mixing up containers of goods was a big obstacle, because FEMA required that such mixed containers be opened and inventoried before deployment. But a container of only diapers would be sent out immediately.

Employment was the biggest immediate concern, at 80 percent. As of this fall, 37 percent said they had full-time employment and 16 percent part-time, while 24 percent were still on the hunt for a job.

But a whopping 40 percent of those who were employed expected to make less than $20,000, or poverty level income. About 40 percent were considering starting their own business.

“They were employed but couldn’t afford rent or deposits,” said Fernandez. She recounted how the needs of the evacuees only came to light as the desperation of the emergency was clear, due to lack of communication with the island immediately after the storm struck on Sept. 20, 2017.

The evacuees are largely families with small children and/or elderly relatives, and 79 percent were female, the report said. Many had already struggled with low incomes on the island, with 71 percent at below $35,000. About one-third of those fleeing the island are still living with family, according to the report.

Fernandez recalled a woman who had just arrived from the island saying, “This is the first night I’m able to sleep without being eaten up by mosquitoes.”