Florida's race for governor will advance to a recount 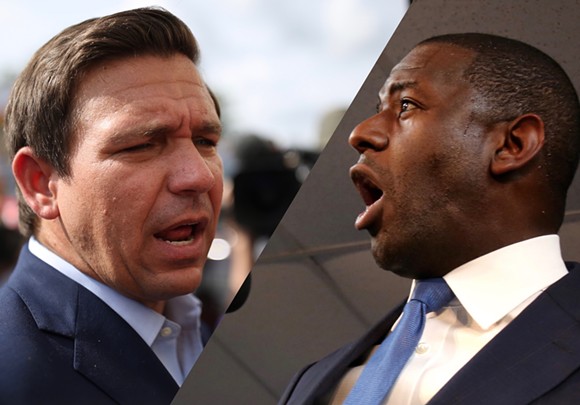 The race for Florida's governor intensified on Thursday as the margin between Republican nominee Ron DeSantis and his democratic opponent Andrew Gillum sank below half a percentage point to 0.47%, launching the race into an automatic recount.

In a matter of seconds, Florida's Division of Elections website updated its tally for three suspenseful statewide races previously thought to be won by Republicans: The gubernatorial race between Gillum and DeSantis, the U.S. Senate race, which will now head to a manual recount due to a .22% margin between Sen. Bill Nelson and Rick Scott; and the race for Florida Agricultural Commissioner, where democratic contender Nikki Fried jumped ahead of her Republican opponent Matt Caldwell for the first time by 575 votes.

A few precincts in Palm Beach and Broward, some of the few infamous Floridian counties that the 2000 presidential election's outcome hinged on, are still counting early voting and absentee ballots. That means as many as 50,000 votes have yet to be counted.

And this is all consistent with Florida's capricious political nature. The tables are turning after Tuesday night, when DeSantis' poll-defying lead led Gillum to concede before 11 PM.

But Gillum's concession is not legally binding. And Nelson, who has been in a recount since Wednesday, has already begun marshaling voters with provisional ballots, hoping to "cure," or correct, discrepancies and help chip away the narrow gap between him and Scott.

"On Tuesday night, the Gillum for Governor campaign operated with the best information available about the number of outstanding ballots left to count," Johanna Cervone, communications director for Gillum's campaign, said in a statement on Thursday before the automatic recount was triggered.

"Since that time, it has become clear there are many more uncounted ballots than was originally reported," Cervone said. The campaign also revealed on Thursday that it retained Barry Richard, a Tallahassee attorney who helped President George Bush overcome the razor-thin margin in the presidential recount in 2000.

On Thursday afternoon, Gillum took to Facebook for his first appearance since election night.

"We are asking that every single vote be counted," Gillum said in a live video. "Whether it's an absentee vote, whether you voted on election day, whether it is a provisional ballot — we want every vote counted."

The DeSantis campaign could not be reached for comment.

Rick Scott, who has said the results in his U.S. Senate race was made final when he declared victory on Tuesday, said in a statement on Thursday that it's "sad and embarrassing that Bill Nelson would resort to these low tactics after the voters have clearly spoken. Maybe next, he'll start ranting that Russians stole the election from him."

When the probability of a gubernatorial recount took shape on Wednesday, campaign staffers for both Gillum and Nelson kicked into high-gear, rebooting their canvassing operations and phone banking centers after what Democrats saw as an unexpected Tuesday night defeat.

But unlike courting pre-election votes, campaign staff must now encourage those who have already voted — specifically those with provisional ballots — to go to their county's election supervisor and cure the issues that could have jeopardized their vote.

Hunting down those voters poses a time-sensitive challenge for Democrats. The deadline to cure provisional ballots is 5pm Thursday, but campaign officials expect that to be extended by a few days. The deadline for the recount overall is Nov. 15.