Today is a great day for a protest in Orlando 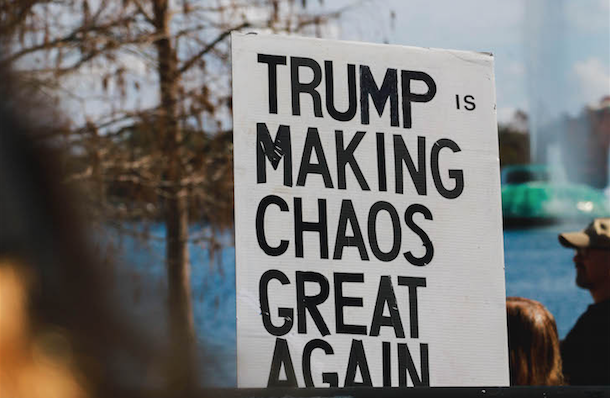 With the threat of financial investigations from House Democrats and a possible indictment of his own son looming on the horizon, President Donald Trump made a desperate act of survival yesterday when he asked Attorney General Jeff Sessions to step down.

Sessions, who recused himself from the Robert Mueller investigation into Russian interference in the 2016 election, handed in his letter of resignation yesterday at the request of Trump.

Now, Sessions’ replacement is Acting Attorney General Matt Whitaker, a Trump loyalist who once wrote an article saying that if the special counsel investigated Trump’s finances it would represent a "red line," and has said in the past that the best way to end this investigation without firing Mueller would be to starve it of funds.

Nancy Pelosi, who leads Democrats in the House of Representatives, called Trump's decision a "blatant attempt" to end or impede the investigation and has demanded that Whitaker also recuse himself, which he more than likely will not do.

If there was ever a time to protest this corrupt administration, it's today.

For those of you calling this a "never ending witch hunt," consider the fact that the Bengahzi investigation and Watergate both took two whole years to wrap up and for fucks sake, Ken Starr's investigation into Whitewater lasted four years! It's not like Mueller has been wasting any time. Since the beginning of this investigation, which was only May 17, 2017, the special council has made 35 indictments! This investigation is far from over.

So, in anticipation of this incredibly telegraphed move from Trump, grassroots activists across the country and the people at MoveOn.org have organized a nationwide "Nobody's Above The Law" protest set for today, Nov. 8, at 5 p.m. local time.

In the Orlando area, protests are scheduled in Winter Haven, Daytona Beach, The Villages, Melbourne, Cape Canaveral and, of course, in downtown Orlando, where it will be held outside of Marco Rubio's office at 201 S. Orange Ave.

Be patient. Be peaceful. Bring snacks.