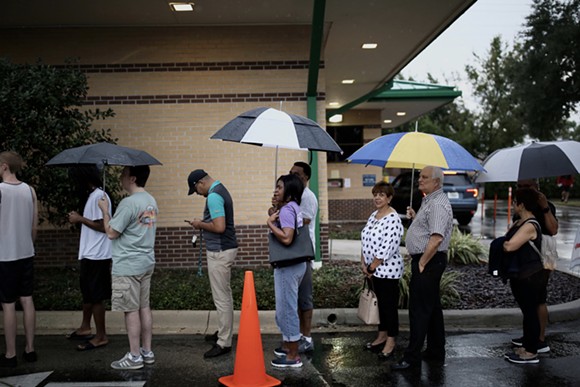 "The Supervisor of Elections in Nassau turned us away and refused to help us legally track down those with issues on their provisional ballot," Alexander Molenaar, an organizer with progressive political committee For Our Future said.

"We had previously gone to the SOE office in Alachua and Union County and received this list with no issues."

Most Supervisor of Elections offices release lists of the names of those who cast provisionals, but some, including Bay County's and Nassau County's, refused out of fears that it would reveal who voters voted for.

"I cannot harm a voter by revealing or allowing someone to figure out how they actually voted," Bay County Supervisor of Elections Mark Anderson told the Weekly.

While the records themselves do not reveal how each person voted, changes to how their precinct voted after the ballot is accepted would indirectly,  Anderson said.

"Let’s say you get six provisional ballots. They happen to be in precinct one, precinct two, three, four and five," he added. "Just one provisional ballot gets added to each precinct, and the numbers come in. Well if you know by the voter history what precinct they’re in, you would be able to tell how that voter voted."

On whether other counties that released the records broke the law, Anderson said "that'll be between their voters and whoever's doing it."

Orange County's election supervisor was one of the offices to hand over records with no hassle.

"There's more than one way to find out who the voter is," Orange County Supervisor of Elections Bill Cowles said. "I'm one who just believes it's easier to go ahead and give it out. And to be quite honest, nobody pays attention to that following-up-on-provisional-ballots until it's a close election like this one."

Democrats rebooted their ground game last week to urge provisional voters to rectify their ballots — absentee ballots with mismatching signatures, or in-person ballots from voters whose eligibility needs to be clarified — before a deadline of 5pm Thursday.

County canvassing boards meet at least two days after election day, as state law says, to review each provisional ballot by hand and determine whether its voter is eligible.

Orange County's canvassing board finished reviewing provisional ballots Thursday night but had not yet revealed how many were accepted. Of the hundreds that usually come in, only about half are accepted.

Anderson said he met with other election officials, including supervisors from Leon County and Nassau County, last year to urge state legislators to remove precinct-level requirements that "make it too easy to track things back to how a voter could possibly vote."

"Because guess what. Some things are just plain secret," he said.

Last week, Anderson disseminated a letter written in 2014 by his office's law firm, Burke Blue Hutchison Walters & Smith P.A., that made a legal case for what Anderson said would expose private voter details.

Sent to multiple counties, including Leon and Nassau, the two-page document quoted a Florida statute that says details on an individual ballot must be restricted to the voter who cast it.

"The name of a voter that cast a provisional ballot is 'information regarding an individual ballot' that is not permitted to be released to the public," the firm's Michael S. Burke, quoting an excerpt from the legalese, wrote.

Like Anderson, Volusia County Supervisor of Elections Lisa Luis refused to release provisional ballot records, but handed them over when she was hit with a public records lawsuit from the Florida Democratic Party. The FDP later dropped its suit.

“I did not feel like it should have been released. I still don’t,” Lewis was quoted as saying.

Molenaar said his organization faced similar pushback from election supervisors from St John's County, Hillsborough County, Bay County, Putnam County, Clay County, and Lafayette county. Whether the offices eventually disclosed the provisional records before Thursday's deadline is unclear. None of the supervisors could be reached for comment.

At least four midterm lawsuits have been filed so far since election day, two of which were successful public records suits against Broward and Palm Beach County from Rick Scott, the U.S. Senate candidate challenging Bill Nelson. Scott declared victory over Nelson Tuesday night with a 1% margin, but as counties finished counting votes through noon Saturday, that margin sank to 0.15% — far below the threshold for a recount.

Florida's Secretary of State Ken Detzner cemented official recounts for the U.S. Senate and Governor's races on Saturday, and all 67 counties in Florida have until Nov. 15 to complete them.

As a court case associated with disclosing provisional ballot information remains to be seen, it's unclear who exactly is breaking the law, if at all. In Bill Cowles' view, the race to find and urge provisional voters to rectify their ballots delivers an important public lesson.

"I see the value of giving it out. Today was the first time we saw people show up and provide information so that their ballot could get counted. So it's a good thing," Cowles said on Thursday.

"Hopefully this will serve as an education to voters about the importance of following up on your provisionals."