The annual Attractions Expo is the flagship convention for the Orlando-based International Association of Amusement Parks and Attractions.

The conference kicks off today with the trade floor opening tomorrow morning. Last year’s conference saw more than 38,000 attendees and the numbers this year are expected to be even higher.

While Disney and Universal typically skip making big announcements during the event, many other industry leaders use it to make their biggest announcements of the year.

This year looks to be no different.

Up next is Jacksonville-based Sally Corporation who is expected to announce a new Sesame Street-themed dark ride slated for a park in Spain. Early press kits include a number of hints pointing to Sesame Street. This likely isn’t the rumored dark ride that was once thought to be a part of the upcoming SeaWorld Orlando Sesame Street land.

A mid-afternoon joint press conference with Daniels Wood Land and Madame Tussauds likely isn’t anything related to their Orlando attraction, but popular concepts tested at some Madame Tussauds museums are often repeated at other locations.

UPDATE: The Madame Tussauds - Daniels Woods Land event unveiled the Jason Momoa as Aquaman figure that will be on display at Madame Tussauds Orlando. The hyper-real figure is dressed in the all-new (and very shiny) costume seen in the upcoming Aquaman movie.

Dynamic Attractions, who has a large design office in Orlando, is also a key vendor to watch on Tuesday. Their groundbreaking new attractions regularly win awards at the expo and are always some of the most talked about. The company is promising that tomorrow’s announcement “will forever change the company and the prominence of its high-tech rides around the world.” 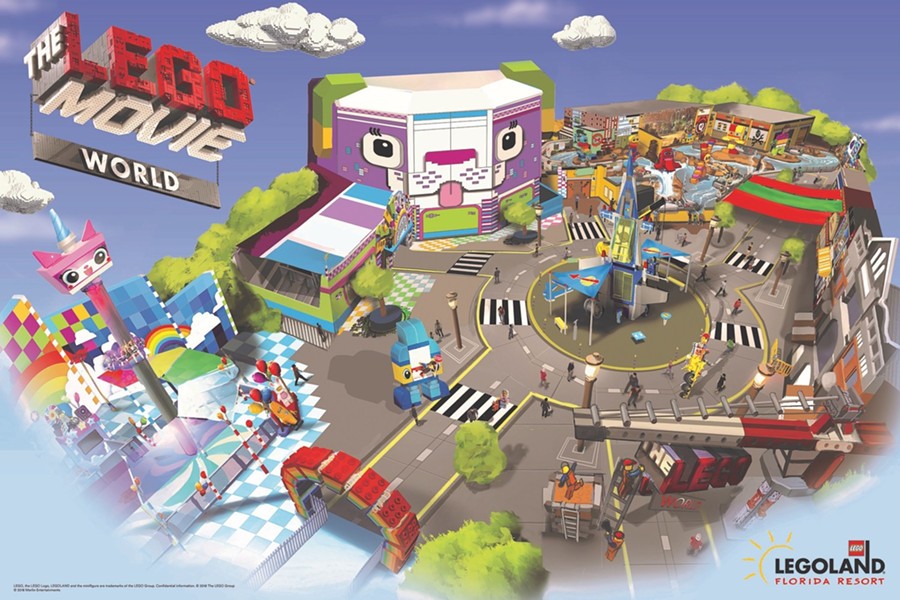 Wednesday morning begins with a major press event for Legoland Florida, where they will give new details on their upcoming LEGO Movie World and the flying theater attraction currently under construction there. As the first flying theater in the Southeast outside of Walt Disney World, all eyes on how well the new attraction is received at Legoland. If the Legoland attraction proves successful, many expect similar attractions throughout parks nationwide. Legoland is going with a vendor who has never before opened on their lower-cost flying theaters in the United States.

Just after the Legoland event, TrioTech who will be announcing details on a new partnership with Ubisoft and will be unveiling an updated version of their highly successful coin-operated roller coaster simulator, Typhoon.

Feld is rumored to be announcing a new partnership with Cedar Fair parks for a Monster Jam-branded roller coaster attraction. New details on the recently opened Trolls experience and the upcoming Jurassic World arena show may also be mentioned during their press event.

Orlando-based Falcon’s Creative Group close out Wednesday with a late afternoon press event where they will give details on a major new partnership. Falcon’s will also be showcasing their recently launched custom designed augmented reality headsets that are designed to meet the grueling demands of theme park settings.

Beyond the specific press conferences, this year’s Attractions Expo looks to be yet another year dominated by virtual and augment reality. Numerous press releases already point to many competing VR and AR concepts with battery life, multiple player options, and hyper-real graphics being the main focus. Zip lines and other lower budget thrill options also seem to be as popular as ever. ZipFlyer, Walltopia, and Extreme Engineering are all planning to unveil new zip line products at this year’s expo.

An increasing presence at the expo are companies designed to track and process guest data in useful ways. Australian-based Luboo will be showcased at the expo for the very first time. The company specializes in smart wristbands that can be used to find missing children and can as a possible competitor to accesso, who has seen less than stellar reviews from their Tapu Tapu system at Universal’s Volcano Bay.

Over the next three years significant additions are headed to nearly every single theme park in the U.S. so there are plenty of new projects and details of previously announced projects that could be shared at this year’s event, but with many Orlando projects already well underway this looks to be a year with few Orlando-related surprise announcements.

However, that doesn’t mean the press events for Dynamic Attractions, SeaWorld, Legoland, and Falcon’s Creative should be overlooked. These and the others mentioned here point to a healthy future for Central Florida’s biggest industry even before we know all the specifics of what the week will bring.