Out of Florida's three major election recounts, Democratic gubernatorial candidate Andrew Gillum probably has the least amount of hope in prevailing over his opponent.

As of Wednesday afternoon, he still trailed behind Republican nominee Ron DeSantis by some 33,684 votes – a margin likely too great to overcome in the recount process.

"Voter disenfranchisement shows up when the president of the United States and the sitting governor of the state of Florida … decide they want to take to Twitter and to Facebook and to Fox 'Faux' News," Gillum said to a full church in front of a choir. "You took one of those forums and decided that you were going to sow seeds that undermine the very premise of democracy – that you were going to accuse the supervisor of elections or an entire county, for that matter, of fraud, of stuffing the ballot box, of doing everything that they could to manipulate the outcome of the elections with not a shred of evidence to back it up. That, too, is voter disenfranchisement."

Machine recounts are being held for the governor's race, as well as the U.S. Senate race where Scott is leading incumbent Democratic Sen. Bill Nelson by less than 13,000 votes and the state agriculture commissioner race, where Democrat Nikki Fried is leading Republican Matt Caldwell by more than 5,000 votes.

Since Election Day, Scott and Trump have alleged unsubstantiated claims of fraud in Broward and Palm Beach Counties – two Democratic strongholds – in an effort to discredit ballots legally cast as Nelson inches closer to Scott in the vote count. Trump has additionally called for the recount to end because ballots are "massively infected," which as some have pointed out, would disenfranchise overseas and military voters whose ballots are counted after Election Day.

The Florida Election should be called in favor of Rick Scott and Ron DeSantis in that large numbers of new ballots showed up out of nowhere, and many ballots are missing or forged. An honest vote count is no longer possible-ballots massively infected. Must go with Election Night!


After the choir sang an emotive and uplifting rendition of "A Mighty Fortress Is Our God," Gillum talked about his concession to DeSantis on Election Day and subsequent retraction of that concession once the vote margin between them narrowed. 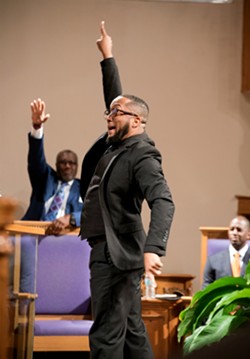 "I still want so bad for us to be able to make a combined impact on this state, and I'm trusting that we're gonna have that opportunity," he said. "There was no way in good conscience that we could sit back and just say 'whatever,' let the chips fall where they may – not a chance."

The Democratic candidate urged for every single vote that was legally cast to be counted.

"Part of standing here today and demanding that every vote be counted is also me saying that whether you're a Republican, or a democrat, or an Independent or no party affiliated – I'm standing here to make sure that your vote is counted, too. Every single vote ought to be counted. And this is without regard to who the ultimate victor or the vanquished might be."

The legacy of voter disenfranchisement remains pervasive in Florida, though it might not look like the violence that African American communities have experienced in the past when trying to vote, such as lynching or being banned from polls, Gillum argued. Voter disenfranchisement still exists when people wait for hours in line to vote, certain forms of identification are rejected or mail ballots are thrown out because of mismatched signature issues that may be trivial.

"My question is – this is a sincere one – if you all so convinced, if you're so compelled that you are the victors, then why would you stand in the way of counting every vote?" Gillum asks. "If the inauguration for a new governor ain't until January, what is the rush? Why can’t we count every vote? We have to count every vote, not just for this election, but because it matters for the next election."