Last weekend was the biennial Destination D event at Walt Disney World and, as expected, it was packed from beginning to end with plenty of news on upcoming attractions for the American resorts.

Hosted in the years in between the larger D23 Expos, Destination D is a smaller, more relaxed convention with the focus more directly tied to Disney Parks and Resorts. Many of the projects teased at last year’s D23 Expo were mentioned at this past weekend’s Destination D event.

We already knew Epcot would be getting a massive overhaul to make it “more timeless, more relevant, and more Disney.” We also knew about a few of the larger attractions coming to the park, including a new Guardians of the Galaxy roller coaster and a new screen based trackless Ratatouille dark ride.

At this weekend’s Destination D event, it was confirmed that the name of the Ratatouille ride will be Remy’s Ratatouille Adventure. This seems to be a simplified version of the dozen names seen on a leaked survey from a few months ago.

Staying in the France Pavilion, we also learned about yet another intellectual property making its way into the educational park that once had zero such offerings. “Beauty and the Beast Sing-Along,” a new interactive sing-along similar to the Frozen one found in Hollywood Studios, will share the current theater with “Impressions de France” and will run multiple times per day. Famed producer Don Hahn, who oversaw both Disney Beauty and the Beast films along with other modern Disney classics like The Lion King and Fantasia 2000, will oversee the production of the new attraction.

The previously announced update to the China pavilion’s Circle-Vision 360 that will feature seamless screens was reconfirmed at Destination D, and a brand-new film for Canada’s Circle-Vision 360 attraction was also announced, though few details on either film were shared.

Another strongly rumored project was also finally confirmed for Epcot. The long-anticipated replacement for Illuminations: Reflections of Earth was given a 2020 debut, roughly six months to a year after the previously announced closure of the current Illuminations show. Just as numerous Disney-watchers had previously guessed, the new show will have a heavy dose of Disney properties. It will use pyrotechnics, fountains, large float set pieces on the World Showcase lagoon, lasers, custom-designed LED screens and other technology that, according to Disney Parks, Experiences and Consumer Products Chairman Bob Chapek, is “a worldwide celebration of Disney music.” A preview video of an early working concept for the new nighttime show was previewed exclusively at the event; it featured clips from Moana, Coco, Aladdin, Brave, Dumbo and other films. The video began with a sound clip from Moana with various versions of the song in different languages fading together to create a multi-lingual clip.

In between the closure of Illuminations and the launch of the new Disney music-focused show, a special “Epcot Forever” show will take place. Some fans have expressed dissatisfaction with the new plans for Epcot, with one fan saying, “It feels like they are staging an Epcot in Memoriam with Epcot Forever, and just moving away from the original concept for good with the new Fireworks.”

Chapek also spoke earlier in the week at the International Attractions Expo, where he shared never-before-seen concept art of the Guardians of the Galaxy ride vehicles and shared a short video of the cars being tested, confirming rumors that the roller coaster ride vehicles will sit on a moving platform with 360-degree movement, four seats per vehicle, and stadium-style seating with the back two seats slightly higher than the front seats.

Moving just outside of Epcot, Disney showcased one of the gondolas that will be seen on the Disney Skyliner and confirmed that the new urban gondola transit system will open “within the next year.” Still unclear is whether the gondolas will include any type of onboard air-cooling system.

Hopping on the Skyliner for the estimated 11-minute trip from Epcot to Disney’s Hollywood Studios, we stop just before the halfway point at the new Riviera Resort, one of three resorts with stations along the Skyliner routes. In a post on the Disney Parks Blog linked to an identical announcement at Destination D, we finally learned some of the inspiration behind the new Disney Vacation Club resort.

The new concept art shows what the new resort’s pool complex will entail. Overlooking the 45-acre man-made Barefoot Bay lake, the new pool complex replaces the theming typical of a Disney resort for a more elegant and symmetrical design. A walkway along the waterfront provides seating areas and views of the nearby Skyliner.

At Disney’s Hollywood Studios much of the focus was on the new Star Wars land slated to open in late fall of 2019. Both of the names for the two attractions found within the new land were released: Millennium Falcon: Smugglers Run and Star Wars: Rise of the Resistance. The Millennium Falcon ride, previously known by codenames Big Bird and The Carousel, will be an interactive hyper-real cockpit experience where guests navigate the Millennium Falcon in teams of six. Star Wars: Rise of the Resistance, previously known by codename Alcatraz, will have trackless ride vehicles that put guests in the middle of a battle where they come face to face with Kylo Ren. As reported last week by the New York Times, it was confirmed the Rise of the Resistance ride will have roughly four dozen animatronics.

John Williams, the renowned composer of the original Star Wars score, is working with Disney on new music for the land, and one of the scores was previewed during the event announcement. The London Symphony Orchestra recorded the new original music at Abbey Road Studios. The video accompaniment showed resort construction footage and previously unseen computer renderings of the two rides. 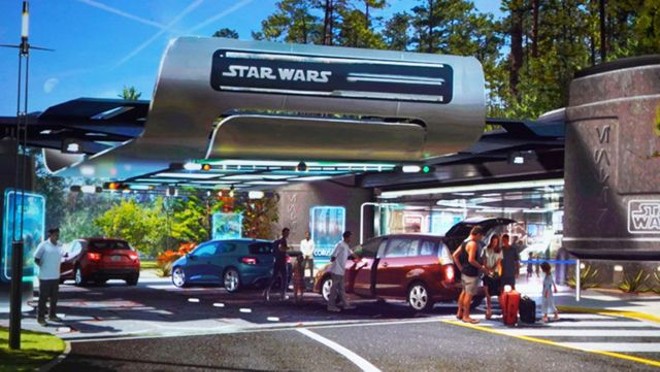 We also received the most details yet for the upcoming Star Wars multi-day experiences. Renderings of the guest drop-off area, bus loading bay, and multiple interior areas of the Star Wars hotel were shared. The concept art seems to confirm permits that were recently shared online, which show a jetway-like bridge linking the hotel to the shuttle buses.

It’s believed that the buses will not have any windows, allowing Disney to keep guests fully immersed within the Star Wars universe.

The “Wonderful World of Animation,” a new nighttime spectacular for Hollywood Studios, was also announced. Using projection mapping, fireworks and other special effects, the new show will celebrate Disney’s rich history of animation. It was one of the only announcements with a hard date attached to it, debuting May 1, just in time for DHS’s 30th Anniversary.

A large part of the Wonderful World of Animation will be projection mapped onto the Chinese Theater, where a new Mickey Mouse dark ride, Mickey and Minnie's Runaway Railway, is currently under construction. The iconic horn sound used in the Steamboat Willie cartoon will be heard on the new attraction, here being used as a train whistle. Models and merchandise for the new attraction were shown at the expo, and Chapek confirmed it will open in “about one year.”

Over on Bay Lake, we finally have a name for the previously announced 900-room hotel that will be located between Fort Wilderness and the Wilderness Lodge. Reflections: A Disney Lakeside Lodge will have both regular rooms and DVC suites. The newly released logo keeps with the modern, zen-like design that was previously confirmed for the nature-focused resort.

In the Magic Kingdom, Mickey Mouse's 90th birthday will be celebrated with Mickey & Minnie’s Surprise Celebration. The nine-month-long celebration begins in mid-January and will include unique entertainment, merchandise and original food items.

Not all of the focus at Destination D was on WDW. A new nighttime spectacular and an updated parade, both Mickey Mouse-focused, were announced for Disneyland along with a celebration similar to the one announced for the Magic Kingdom.

Mickey’s birthday will also be celebrated on the high seas with the Mickey & Minnie’s Surprise Party at Sea deck party on the Disney Fantasy cruise ship.

Notably missing from this year’s announcements were the rumored Mary Poppins and Coco attractions for Epcot, the Indiana Jones mini-land thought to be heading to DHS, and the previously announced mixed-use plans for Flamingo Crossings. With the exception of Flamingo Crossings, all of those rumored projects post-date the WDW 50th Anniversary in 2021. All of the announcements at this year’s Destination D event will open ahead of 2021. It’s thought that next year’s D23 Expo will include new details for many of post-2021 plans in the works for WDW.