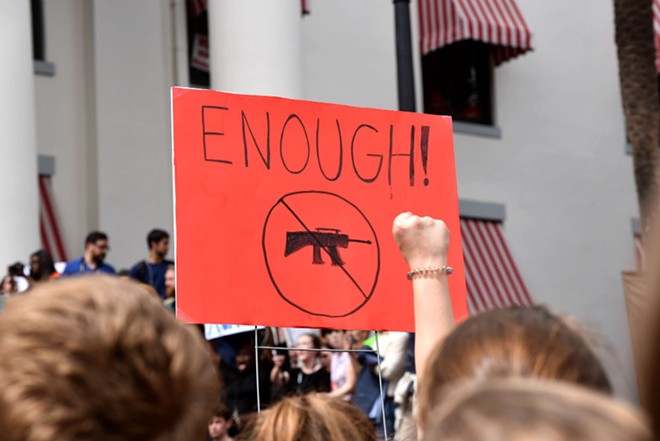 A constitutional amendment that would ban semiautomatic assault weapons in Florida has been proposed for the state's 2020 ballot.

The amendment was pushed forward by Ban Assault Weapons NOW (also known as BAWN), a Miami-based political action committee that includes victims' family members and survivors of the mass shootings at Marjory Stoneman Douglas High School in 2018 and the gay nightclub Pulse in 2016.

"Congress won't act," the organization's website said. "The Florida Legislature won't act. The only way to ban assault weapons like AR-15s and other weapons of war is for the people of Florida to go to the polls and vote. This campaign will place an amendment on the 2020 ballot in Florida to do what our elected leaders refuse to: Ban Assault Weapons NOW."

The proposal, which was posted on the state Division of Elections website earlier this month, prohibits possession of assault weapons, which it defines as "semiautomatic rifles and shotguns capable of holding more than 10 rounds of ammunition at once, either in fixed or detachable magazine, or any other ammunition-feeding device."

Handguns would not be prohibited, and the proposed amendment notes that "the right of the people to keep and bear arms in defense of themselves and of the lawful authority of the state shall not be infringed," but shall be "regulated by law." The proposal also codifies a mandatory three-day waiting period, excluding weekends and legal holidays, between the purchase and delivery of any handgun – though concealed weapons permit holders will not be subject to this provision.

Military and law enforcement employees using semiautomatic weapons in their official capacity would be exempt. People who lawfully own assault weapons currently would get an exemption on the ban for a year but would have to register the gun with the state. Violating the ban would be a third-degree felony, though the Florida Legislature may designate a greater criminal penalty, according to the proposal.

To get on the 2020 ballot, the proposed amendment would need valid petition signatures equal to 8 percent of the votes cast in the last presidential election. The 2018 threshold was at least 766,200 signatures, and that number is expected to go up for the 2020 election.

BAWN has so far raised almost $410,000 since March, according to the state Division of Elections. The organization's steering committee was led by U.S. Rep. Ted Deutch and Coral Springs Mayor Skip Campbell until Campbell's sudden death last month. BAWN's committee members include Pulse survivor Brandon Wolf and the mothers of two of the 49 victims killed at the Orlando nightclub – Mayra Alvear-Benabe, the mother of 25-year-old Amanda Alvear, and Christine Leinonen, the mother of 32-year-old Christopher Andrew Leinonen.