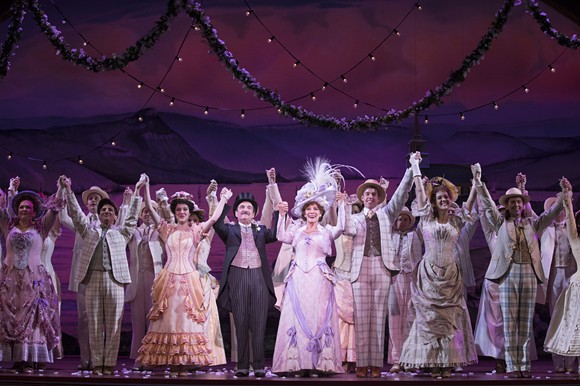 Broadway musicals have the ability to be as challenging and thought-provoking as any serious drama, but sometimes instead of chewing on a heavy meal, you want something light and easily digestible. If you’re still feeling full from your Thanksgiving feast, the new tour of Hello, Dolly! currently playing at the Dr. Phillips Center is a perfect serving of theatrical comfort food, like an elaborately wrapped box of chocolate covered peanuts: sweet, slightly salty, and impossible to stop snacking on once you’ve started.

If one were to rank the best-constructed books from Broadway’s golden age, 1964's Hello, Dolly! would likely land low on the list. Adapted by Michael Stewart from Thorton Wilder’s play The Matchmaker, the overstuffed storyline follows a pair of bumbling shop clerks (Nic Rouleau, Barnaby Tucker) as they explore late 19th century Manhattan in search of romance and adventure – or as they call it, pudding. Meanwhile, multiple intersecting subplots involve their irascible employer (Lewis J. Stadlen); his caterwauling niece (Morgan Kirner) and her starving artist suitor (Garett Hawe); and a winsome hat-making widow (Analisa Leaming) in a string of romantic misunderstandings straight out of a mid-century sitcom.

Despite an award-winning reputation, the Jerry Herman score only has a couple truly memorable tunes (both of which will be familiar to fans of Wall-E) and the script often seems uncertain who its protagonist should be. So, how has this show cemented its status as an all-time classic over the past 54 years? Simple: on the strength of the legendary leading ladies who have portrayed Dolly Levi, the titular meddling yenta who yearns to arrange happy marriages, most of all her own. Originally written for Ethel Merman, the part was made iconic in thousands of stage performances by Carol Channing, immortalized on film by Barbara Streisand, and most recently interpreted in New York by Bette Midler and Bernadette Peters.

For the national tour of the latest Broadway revival, Tony-winning director Jerry Zaks has secured Betty Buckley to fill Dolly’s formidable high-heeled boots, and it’s no exaggeration to say the septuagenarian star of Cats and Carrie is among the only living luminaries with the status to stand toe to toe with her hallowed predecessors. From her applauded appearance in the opening number, to her stately staircase descent during the title song, Buckley beams with with the enthusiasm of a far younger performer as she delivers her still-strong belt to the back balcony. Her performance will remind even the most cynical audience member that a good old-fashioned “star vehicle” can still deliver the kind of unadulterated joy that’s often muted in more sophisticated shows.

There’s plenty more to praise in this production – Warren Carlyle’s exhaustively exuberant choreography, Santo Loquasto’s eye-popping pastel costumes and Currier & Ives inspired scrims, the supporting cast’s side-splitting comic timing – which smartly eschews radical reinvention in favor of a paying loving tribute to original director Gower Champion’s vision. But really, Betty Buckley is the only reason you need to attend; even if the material is a bit musty, the opportunity to experience a true icon like her live on stage isn’t a parade you want to let pass you by.