With major new additions to both of its parks, Tokyo Disney is the midst of its largest expansion since the opening of Tokyo DisneySea in 2001. A new 475-room hotel looking into Tokyo DisneySea was announced earlier this year, the fifth hotel for the two-park resort.

Now, yet another hotel is in the works.

The yet-to-be-named Toy Story-themed hotel will have 600 standard rooms stacked into 11 stories, with a restaurant and a retail shop. A press release by Tokyo Disney’s owner, the Oriental Land Company, confirmed that the new hotel will cost an estimated $276 million to develop.

This will be the second Toy Story-themed hotel in the world. The first opened in 2016 at Shanghai Disneyland.

In the press release, a background narrative is given:


“Andy, the little boy who loves his toys – Woody, Buzz Lightyear and the rest – has embarked on the ultimate backyard project: a building to house all his toys. When Andy is called away by his mom, his toys and their helpers take over the “toy” tower and open it as a hotel for all the “honorary” toys of the world.”


With a fourth movie on the way and now three theme park lands around the world, the Toy Story franchise has proven extremely popular for Disney.

Rumors of a Toy Story Hotel coming to Walt Disney World have been around since well before the one in Shanghai. Most of the speculation has Disney eventually redoing the Pop Century resort. 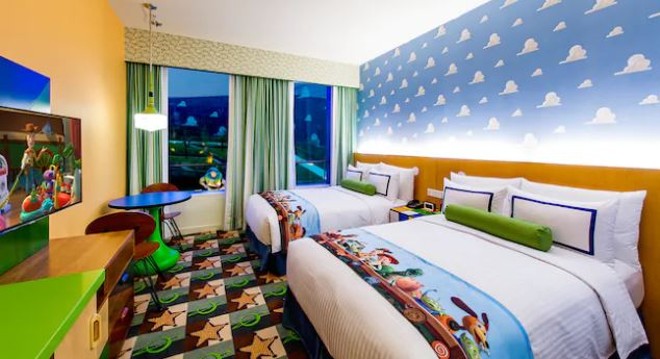 No details on the look of the new Tokyo hotel have been revealed. The Shanghai version is a large traditional building, with a cloud print like that found on Andy’s bedroom walls on the glass exterior. Inside, the theme is more subtle, with a design similar to recent renovations of the value resort rooms at Walt Disney World that include small touches instead of over-the-top theming.

Tokyo Disney’s Toy Story-themed hotel will open during the 2021 fiscal year, which runs from April 2021 through March 2022.